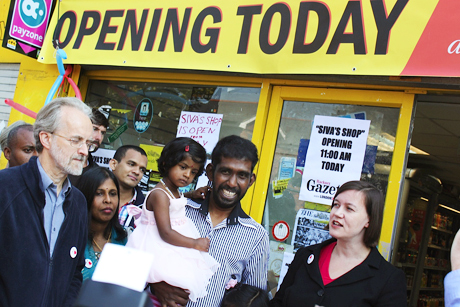 The year 2011 was one of international financial turmoil and natural disasters but also democratic uprising and royal matrimony.  Closer to home, few will dispute the claim that the most significant event to take place 2011 was the dramatic bout of disturbances on 7 and 8 August dubbed simply ‘the riots’.

The Pembury Estate in Central Hackney was the epicentre of the pillaging and burning that raged down Clarence Road, Narroway and Mare Street following the police killing of Mark Duggan in neighbouring Tottenham. Some tried to prevent the violence. Local woman Pauline Pearce gained fame for her heroic exhortations against the looting. Turkish shopkeepers in Dalston were also commended for defending their premises from rioters. Yet Hackney’s streets were tense for days afterwards, as physical damage was repaired and neighbourhoods sought to come to terms with what had happened.

With the economy showing no signs of perking up and the Coalition government determined to make ordinary folk pay the price, it is not surprising that this was a year of political strife in what remains  one of the poorest local authorities in England.

In January Hackney Council passed a controversial  ‘nil’ policy banning strip clubs and sex shops from the borough, only to relent and allow existing ‘sex establishments’ to stay.

In March we suffered budget cuts – not as steep as some had predicted as the council drew heavily on its reserves, but nevertheless sufficient to lead to job losses in departments responsible for youth services, parks, and other areas. Hackney Town Hall was briefly occupied by outraged protesters.

In May, Cllr Linda Kelly made a dramatic defection from the bosom of Labour into the arms of the Conservatives.

Also in May, a nationwide referendum on the Alternative Vote electoral system was held. The idea was resoundingly defeated, but Hackney delivered the highest ‘yes’ vote of any local authority in the country – 61 per cent.

In November the global Occupy movement came to Hackney, taking over a disused building belonging to the bank UBS, before moving on in December to commandeer a former courthouse in Shoreditch.

Debate raged in 2011 over hipsters and what they do and don’t bring to the borough. Meanwhile several indubitably hip new cultural institutions opened, including the Hackney Picturehouse cinema, Dalston Roof Park, Netil360 bar, plus a slew of new cafes and galleries.

Another side of Hackney was portrayed in Ronan Bennett’s television drama Top Boy, which was set in the borough but filmed elsewhere due to the refusal of the local apparat to grant filming rights on council estates.

Gongs for the boys and girls

The borough’s residents and institutions were showered with accolades of all sorts in 2011.

The Hackney Citizen was nominated for the Newspaper Awards ‘Best Use of New Media’ category, whilst the council’s freesheet Hackney Today won the Chartered Institute of Public Relations (CIPR) Local Public Services’ ‘external newspaper or magazine of the year’ award.

Hackney Council once again graced Private Eye’s Rotten Boroughs page, bagging an award for ‘Moral Guardians of the Year’ for “outlawing strip shows in pubs while doing nothing about actual brothels masquerading as ‘massage parlours’” (see above).