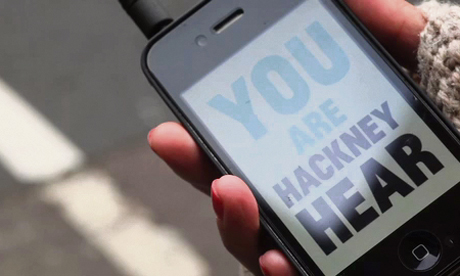 The team behind the Hackney Podcast has dreamt up a brand-new smartphone app for iPhone and Android. After almost a year of conceptualisation and software-tweaking, the GPS-triggered tour of Hackney is set for release in early 2012.

This mega-textured audio collage layers music, oral history, anecdote, poetry, literature and hard facts, changing shape as you make your way in and out of the invisible radii that dictate the app’s content using GPS technology.

For now, the project is contained within London Fields and Broadway Market, but its aims are far broader, hoping to eventually cover all of Hackney.

The app applies same principle of a talking sat-nav, only it has something really interesting to say. “We wanted to create something that changed the way you look at your location, rather than just get from A to B,” explains project manager Matt Hill.

Hackney Hear was the brainchild of award-winning radio producer Francesca Panetta. The idea was to make audio work on location while broadening listeners’ view of Hackney, contextualising it using a wide range of sounds.

The right software for this ambitious project didn’t yet exist, so the team set out to find a developer that understood their vision. The project quickly evolved into a symbiotic relationship between Hackney Hear the location-based software developer, Amblr.

“Most software companies we approached scared us off, saying it was too difficult to achieve” says Hill, “but eventually we found a developer that was on the same wavelength…They could put sounds on a map. And that was Amblr.”

Amblr was yet to perfect its location-based software, and Hackney Hear wasn’t yet sure how their vision would work in practice. So like any good marriage, it became a collaboration, with both sides learning from the other.
The final product is a super-contextualised walk in the park. The element of serendipity has been at the core of Hackney Hear since the beginning: you choose where to go, and the stories follow you. While this is very much an audio project, it’s important to keep your eyes open as you walk.

As a result, visual observations of the world passing by become the images that complement the audio – a guy clutching a fragrant bouquet of lilies; a woman inexplicably waving a rolling pin in London Fields; a sulky bearded man buying a pint of milk and a demi-loaf of Hovis, those bachelor staples. Every time you open the app, the experience changes, adding sight to sound, and shifting sounds with movement to create a sort of real-time cinema.

What’s really unusual about Hackney Hear is it couldn’t have been conceived without the smartphone lifestyle, which generally serves to drag us out of the moment; yet the whole point of this exercise is to be where you are.