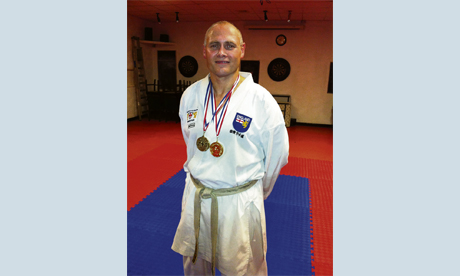 Tony Gray has claimed his second Masters title in three months, winning the British gold medal on the last Sunday in June.

The fifth dan black belt, who owns Anthony’s Dry Cleaners on Well Street, won both honours at competitions in Sheffield.

Gray originally thought he would be competing in the autumn but his early-summer challenge at the British Championships worked in his favour.

“About three weeks after I won the English I got the entry forms through for the British, which was good for me because I was already fit.

“It was the hottest day of the year. Everybody was in the same boat. I remember standing there, ready to go out and fight, and it was just dripping off me. It saved me jumping about and warming up because I was already warm just standing there.”

Gray started fighting late in the afternoon and, having competed since 1989, he knew what to expect from the running order. He was able to relax and enjoy the day.

He said: “It was well-attended, there was an opening ceremony, England, Scotland, Ireland and Wales all stood out in front of the stand and they played the national anthems.

An injury suffered in Sheffield is now likely to provide Gray with an enforced break from competitive karate: “I’ve torn my rotator cuff in my shoulder by throwing punches in the tournament. I think I’m out of action for a couple of months.”

If his shoulder recovers in time, Gray may fight at the European Masters later this year.

← On The Record: dying to tell the truthA Midsummer Night’s Dream in Stoke Newington →