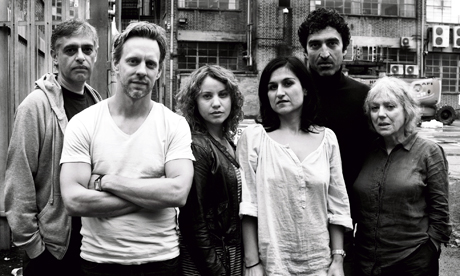 The cast of On The Record. Photograph: AGPR

Journalists are being killed in unprecedented numbers as they hold murderous and corrupt regimes and individuals to account.

Since 1992, 868 reporters have died as a result of their work, according to the Committee to Protect Journalists, including in planned reprisals for what they have written, broadcast or filmed. In just under two thirds of these cases the murderers have been clearly identified but go unpunished.

And in the first six months of this year alone, 22 reporters were killed and many more injured in the uprisings in Tunisia, Libya, Bahrain, Yemen and elsewhere.

On The Record, the new play from human rights theatre company Iceandfire, digs behind these shocking statistics and uses personal testimony to dramatise the remarkable true stories of six campaigning journalists.

In Sri Lanka, brothers Lal and Lasantha Wickrematunge start a newspaper which publishes the stories others will not touch. Mexican journalist Lydia Cacho uncovers a child pornography ring involving politicians and businessmen, and in Moscow, Elena Kostyuchenko investigates mafia collusion with the police.

American photojournalist Zoriah Miller documents the aftermath of a suicide bombing in Iraq in defiance of US censors, whilst Amira Hass, the only Jewish Israeli journalist to have lived and worked in the Occupied Territories, is outspoken in her criticism of the occupation.

On The Record weaves together the stories of these disparate characters, linked by their determination to challenge the official version of the truth with, in some cases, horrifying consequences.