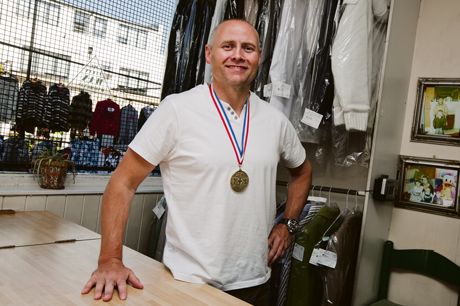 Following a second retirement from the sport, fifth dan black belt Tony Gray won the gold at the competition in Sheffield this month (17 April).

Speaking to the Citizen at his shop, Anthony’s Dry Cleaners, the fighter said: “I hadn’t competed for about three years, but I used to represent England and Great Britain back in the 1990s. I got my shop in Well Street in 1999, my daughter Lauren was born, so I retired internationally.”

Gray revealed that, at 42, he has had to alter his training regime and rely on the personal discipline that he has developed over the years to stay at the top: “You have to be more athletic, you have to do the training to get the speed back, which is the first thing you lose as you get older.

The attitude and perseverance that Gray has gained through decades in the sport have also been an advantage in his working life: “It’s the same in business really, the discipline from karate, that’s why I’m still in business I think, that’s why I’ve survived. They say survival is now the new success.

Commenting on how he and neighbouring businesses are doing, he said: “We’re down 30%. It’s been tough for the last few years but it’s not just me, it’s everyone on the street.”

Gray has a dojo in his garden and has also been teaching in Barking for the last 17 years. “I’ve now got my own Karate-Do Federation, I’m the chief instructor. I founded it with a friend of mine (Steve Scott) when we came back from Japan in 2008. I taught in Tokyo and did a demonstration for the English karate team.

“I’ve got some younger students where the parents have coerced the children to do it because of the self-defence element.

“One of my students started with me when he was six years old, he was being bullied at school. Now he’s 23, he’s English Karate Champion and has represented his country.

Speaking of his own early days he said: “When I was a kid I needed karate, I was very boisterous. I needed a good kicking at times – my instructors did it in the best possibleway.”

Gray’s respect and intense appreciation for the sport is clear. “Every challenge is different, whether it be going for a belt or winning a tournament or just trying to overcome the difficulties of a kick or a punch. Along the way it’s been a journey and that journey has saved me, even in my personal life when that’s been difficult, I’ve always been able to go back to that constant thing which is karate.

Gray sees no reason why he should not keep balancing his time between beating the stains out of his customers’ clothes locally and beating the best nationally. “The only limitations are the ones you put on yourself,” he says. “I’m considering doing the British Championships in October. I’d like to win that.”

← Hackney hoard of gold coins fails to count as treasure, court rulesYes, but is it drawing? London 2011 Biennial Fundraiser →