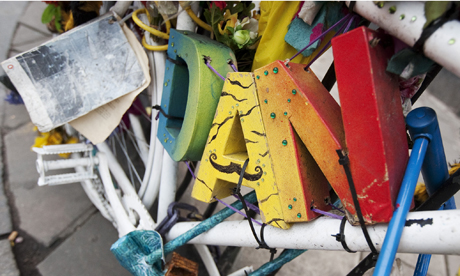 The sad, recent death of cyclist Daniel Cox, 28, at Dalston Junction has sparked more welcome interest in cycling safety issues and a desire to make our streets safer for vulnerable road users.

Lorries are heavy industry on wheels and we should be applying the same rigorous approach to health and safety on our roads as we would expect in any factory.

The deaths of over a dozen cyclists a year in London are not ‘accidents’, they are avoidable acts of social neglect. We should stop shrugging our collective shoulders and make a determined effort to end these unnecessary deaths and serious injuries. This can be done, but it requires political will and public investment.

The reason why we have had over twenty years of year-on-year falls in road casualties in London is because of the millions of pounds invested in stopping preventable deaths and maimings. Seat belts and air bags have made driving safer, whilst traffic lights, safety cameras and traffic calming have reduced pedestrian casualties.

When I became the previous Mayor’s Road Safety Ambassador there were around 6,000 people killed or seriously injured on London’s roads. By 2009 this had almost halved to around 3,200. That is a massive success story, which is the direct result of the tens of millions of pounds wisely spent.

Protection for cyclists has proved difficult, but there are some successes. The number of cyclists has risen fast in recent years, whilst the rise in the number of cyclists injured has gone up at a far slower pace. The result is that individual cyclists are far less likely to be injured than a decade ago. This is important to emphasise as fears about safety are the main barrier to people taking up cycling in London.

The growth of 20mph zones in residential areas and more cycle training have definitely helped. There are also some good examples of cycle lanes, although the quality and length is nothing like the networks which have created the growth of cycling in many continental cities.

The government cuts have had an impact on this work. The current London Mayor stopped funding for the London Cycle Network in order to help pay for cycle hire in central London. The off-road cycling and walking Greenways being built in London by Sustrans have also lost their separate pot of funding.

Despite the success in reducing the ratio of cyclists injured in London, the number of cyclists killed every year has remained fairly constant and the majority of these deaths are down to collisions with lorries. Thanks to a concerted campaign by cyclists, we managed to stop the London Mayor from cutting the specially trained Met Police unit which works with road haulage companies and to use health and safety laws to enforce changes in the way they operate.

There is also a growing demand for all lorry drivers to be specially trained in cycle awareness in the same way that bus drivers are. Personally, I don’t think that anyone should be allowed to drive a taxi, bus or lorry in London without going out with a cycling instructor and experiencing life on a bike.

One of the next big innovations in Hackney will be the cycling superhighway which is due to run down the A10 via Stamford Hill to Shoreditch. This route will only work if the London Mayor gets rid of the Stoke Newington one way system and changes his current plans for Tottenham Hale by transforming it into a more cycle-friendly environment.

There are lots of detailed problems with these superhighways which fail to deal with parking and dangerous junctions, but the bigger concern is that the Mayor is encouraging large numbers of cyclists onto London’s main lorry routes. There is a strong case for having lorry bans during the morning and evening commuter hours.

Cycling in London is getting safe and there is a strong argument that the more cyclists we have on our roads the safer it will be. Many cities have experienced this point of critical mass where there are so many cyclists on the roads in a particular area that drivers adjust their behaviour to accommodate them.

I think this is already happening in places like Hackney, but we still have a long way to go before that cultural shift is complete and we can say that London is a genuinely cycle-friendly city.

Related: Powers that be act to end HGV blind spots