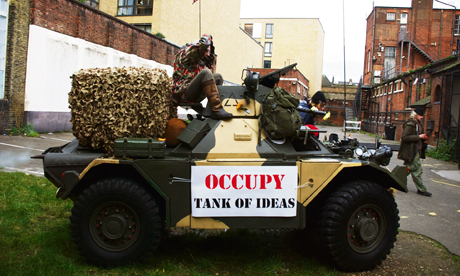 A group of protesters who took over the disused Old St Magistrates’ Courthouse in Shoreditch on 20 December have agreed to vacate the building by 23 January.

The camp, dubbed Occupy Justice, appeared in court on Tuesday 3 January to contest an application for a possession order made by Mastcraft Ltd., which has owned the Grade II-listed building since 2006.

After a day in court, an agreement was reached between the owners and the occupiers, with the occupiers deciding to hand back the building in just under three weeks.

Occupy Justice will ‘look after’ the empty courthouse until then. This was agreed to by the presiding judge.

The property currently remains closed to the public, as made clear by a note on the door that reads: “We’re busy cleaning and making the place beautiful, but will be very happy to welcome you all in soon!”

It is believed Mastcraft will begin redevelopment of the building when it returns to the firm’s control.

Despite the impending eviction, Occupy London is ‘pleased’ with the amicable outcome of the court case. A press statement by the Occupy movement said: “Occupy London would like to thank Mastcraft for having the imagination to work with us in giving this fine building a new lease of life – as well as perhaps the last ever trials to take place in the building – while it awaits redevelopment. “We hope this agreement will serve as a model for others to follow.”

With the future of the occupation of the courthouse at 335 Old Street secured for three weeks, the group plans to hold a series of ‘trials of the one per cent’, with a schedule of events to be released soon.

These will be mock trials of bankers and corporations accused of financial greed and tax avoidance. Cell doors underneath the courthouse have been adorned with the names of politicians and finance corporations.

Speaking immediately after the occupation began last month, protester Leon said: “Nick Clegg and David Cameron will be tried for not fulfilling campaign pledges and other offences. I hope Boris Johnson gets put on trial as well.”

Around 50 Occupy London protesters, including ex-servicemen group Occupy Veterans, drove a small tank – the ‘tank of ideas’ – to the former court on the morning of Tuesday 20 December. They were met with little resistance from police, who were at the time described as ‘sympathetic’, and no arrests were made.

Following this announcement, the total number of occupied London spaces will soon return to just three: the St Paul’s Cathedral camp, the Finsbury Square camp, and the Hackney occupation of the 800-room UBS building.

Eviction plans for these camps remain speculative, with no firm intention to vacate the properties.

← ‘Olympic monster’ appears on eBayHackney 2011: the year that was →