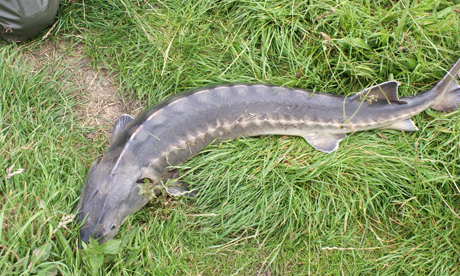 A fishy tale: the sturgeon on eBay

The mysterious creature that hit the headlines in last month for hunting geese around the Olympic Park could be yours for just £595 from eBay.

According to qualified angling coach, Jo Bloom, the monster is most likely a giant Siberian sturgeon.

She told the Hackney Citizen: “The quarries and clear waters of the Lea are ideal for them to live.

“They are tough creatures that can withstand winters far colder than ours as they are predominantly found in Siberia, Russia.”

One such sturgeon was up for grabs on eBay for £595. The description stated: “Here we have a huge Siberian sturgeon. This sturgeon measures over 50 inches and weighs well in excess of 20lb. This is the biggest sturgeon that I have ever seen for sale in the UK so grab it while it is available.”

Jo Bloom added: “Canadian geese would be a tasty meal to bulk up for winter,” for the fish which can grow up to 4.6 metres.

She first encountered the giant fish when she was younger, observing them from bridges and then attempting to catch one.

She recounted: “I knew that if I found a large enough bait I could hook one with my Winfield tackle, 6ft fibreglass rod and size 2.0 sea fishing hook.”

She added: “When it took the bait it stripped every foot of line and broke me in an instant.”

Sturgeon were native to the UK but believed to be extinct. Today they can be found at aquatics outlets, and are occasionally illegally released into the wild.

‘Nessie of the Lea’ mystery as river raider lurks beneath