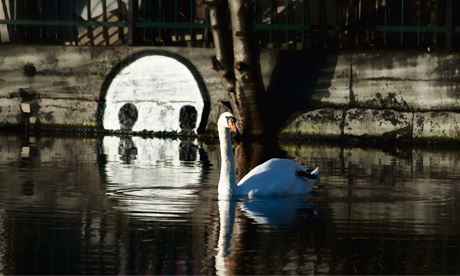 Olympic swimmer: “Beneath the surface of the Lea, in the shadow of the London 2012 stadium, swims something big and hungry. It may struggle to keep its head above water this winter but at least it’ll be having goose for Christmas!” says Hackney artist Stik. Photograph: Dan Beecroft

A beast that once haunted Hackney’s waterways could be back after a resident witnessed the sudden death of a 16lb Canada goose on a nearby canal.

Mike Wells, a filmmaker who lives in the Lea Valley near the new £9bn Olympic Park, witnessed the goose being dragged under while having coffee on the river with friends.

He told the Hackney Citizen: “It was about midday. We were sat on deck of my boat watching the goose. Suddenly the bird just went vertically down into the water. I was absolutely gobsmacked.

“Whatever took it didn’t come back up again. There was no sign of it whatsoever, but it was obviously pretty big.”

According to Mike, similar sightings have also been recorded at nearby Springfield Marina.

The events have echoes of a spate of large bird attacks along the canals next to Hackney Marshes six years ago. Lea Rivers Trust staff reported seeing a Canada goose being dragged beneath the surface in 2005, and large holes were found burrowed into the bank of the river.

The incidents were linked to a giant turtle or alligator at the time. The mystery predator disappeared before it was discovered, but it now seems to have returned.

Hackney resident Michael Allen, a zoology graduate, believes it may be a reptile. He said: “It could be an escaped pet snake like a python. It could survive in this climate, although it would be a bit sluggish. A small goose or a duck could be a perfect meal for it.”

A spokeswoman at British Waterways told the Hackney Citizen: “We have had big terrapins found in other parts of London. It may just be a giant pike, or a mink.”

She added: “We want to provide a habitat for all of the creatures on the Lea Valley waterways unless they’re invasive. If a creature was found to be invasive, action will be taken.”