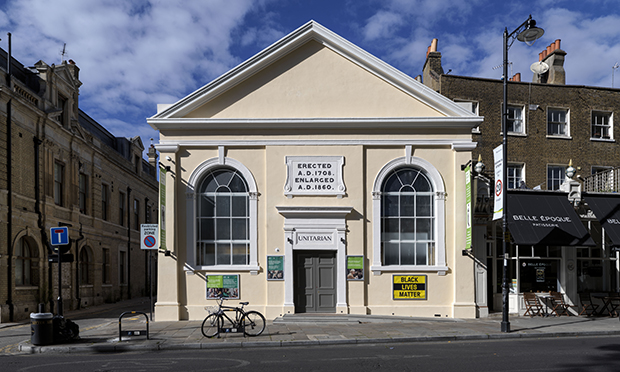 The historic Newington Green Meeting House will host an evening of art, music and talks on 20 May to raise money for refugee support groups.

The event, ‘From Calais to Kyiv’, takes place from 7pm until 9pm, and will feature a live solo show by singer-songwriter Jelly Cleaver.

The venue describes it as a “fundraiser for charities working on the ground to help displaced people”, with all donations being split between an organisation supporting Ukrainians and Care 4 Calais, which works with refugees across the globe.

Tickets are £10 each, and you can book them here.

The Meeting House is one of a number of local organisations trying to help refugees, as people across the world are displaced by war.

Charity club nights and one-off restaurant evenings have been hosted across Hackney to support asylum seekers and the people working with them.

And that work is as important as ever in light of the UK government’s controversial new plans to relocate asylum seekers to Rwanda.

Under the proposals, any adult coming to the UK without authorisation could be relocated to the east African nation, which Prime Minister Boris Johnson says will have the “capacity to resettle tens of thousands of people in the years ahead”.

In addition to the fundraiser, the Meeting House hosts exhibitions and life drawing classes, and on 30 April will hold a day of discussions to celebrate Wollestonecraft’s 260th birthday.