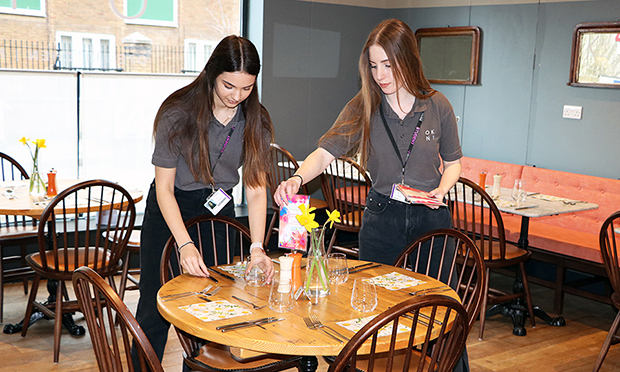 A number of Hackney businesses, politicians and residents have stepped up to show their support for Ukraine and raise funds for those who need it most.

Ukraine has now been under siege from Russian troops for over a month. Efforts to lend a hand to the people of Ukraine have been seen across the borough, with MPs publicly speaking out and local enterprises holding special events to raise money for charities operating in the country.

Here is a round-up of some of the best fundraising and awareness efforts the borough’s businesses have seen so far – and what’s to come.

OKN1 hosted a Ukrainian benefit night on 17 March with profits going to UNICEF. The restaurant, which typically hosts a student takeover night on Thursdays, held the evening in support of two Ukrainian students at New City College – a stone’s throw from the Hoxton eatery.

The evening boasted a three-course set menu comprised of authentic Ukrainian food, with the two students – Angelina Duschak, 17, and Elvira Grygutsiak, 18 – contributing to the concept behind the food. The pair are both training at OKN1, which provides culinary training for young people, while studying at New City College’s Hackney campus.

As well as proceeds going to UNICEF, there was a collection on the night for diners to contribute.

Dalston’s EartH opened its doors to support the people of Ukraine by organising an urgent supplies collection. Taking place on 2 March from 10am to 10pm and continuing until the following day at noon, essential items collected included batteries, painkillers, nappies, thermal wear and torches.

Donations were sent to White Eagle Club / Klub Orła Białego, a South London Polish restaurant which is delivering items to Przemyśl, a southern Polish city close to the Ukrainian border.

The Salvation Army hosted a candlelit vigil at the beginning of March in support of the people of Ukraine. The vigil, which lit up Lower Clapton Road on 1 March, was attended by residents as well as local community and faith leaders, and took place on the same evening that diplomats walked out during Russian foreign minister Sergei Lavrov’s speech at the United Nations in Geneva in protest against the invasion.

Attendees were invited to write words of solidarity on a table display which was then adorned with candles forming the shape of a peace symbol.

The Salvation Army one of a number of charitable organisations currently providing practical support to the people of Ukraine, with personnel on the ground and in neighbouring countries.

In response to the crisis, an open meeting has been called to discuss housing solutions for Ukrainian refugees in Hackney.

Residents and community groups are invited to attend the online meeting on 29 March from 4.30 to 6.30pm to find out how Hackney will be supporting refugees through the Homes for Ukraine sponsorship scheme and the Ukraine Family Scheme.

Organisers of the event said: “Hackney has a long-standing reputation of being open and welcoming to migrants and refugees.

“The refugee crisis in Europe continues to get worse, and Hackney has always been prepared to support its residents and those affected by conflict.”

You can register for the free event here.

Performers included KT, Aghnes and Irene Fo, and the musical event ran on donations which went to UN WOMEN / Ukraine to help women who are being forced to flee the country.

In the neighbouring borough of Tower Hamlets, Studio 289 was one of a number of venues to host a club night in support of Ukraine.

On Friday 11 March, revellers turned up to the Cambridge Heath party spot, where 100 per cent of ticket sales and all profits from the bar went to either the Ukrainian Red Cross or humanitarian charity Vostok SOS.

Have you been helping efforts in Ukraine? Get in touch in the comments and let us know.

← Child Q: School apologises for teenage girl’s ‘harrowing’ experienceHackney Carnival is coming back – here’s how you can take part →