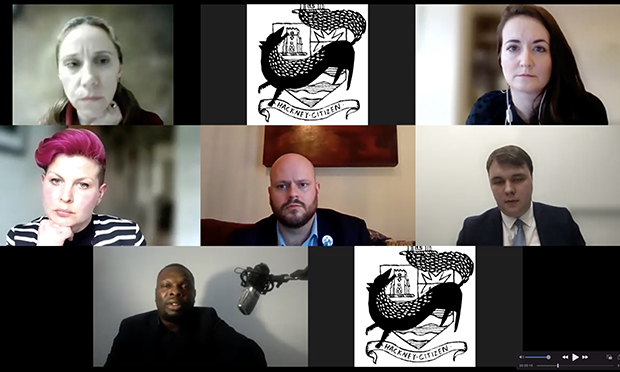 It’s a tough job and they all want to do it.

Hackney’s Mayoral candidates set out their stalls to explain why they think they should take the top political job at the Town Hall.

They joined an online hustings organised by the Hackney Citizen and answered residents’  questions covering a range of issues including housing; transport changes to tackle the climate emergency; and the Child Q scandal after a  Black teenager was strip-searched by police at school.

Whilst candidates had areas of disagreement about policy they also had some common ground and committed to making Hackney a welcoming place for all.

Two of them, Oliver Hall (Conservative party) and Gwenton Sloley (Hackney People Before Profit),  claimed that the £85,375 salary which goes with the Mayoral role is too high.

The Greens’ candidate, Zoë Garbett, said she wanted to work with groups like Hackney’s Youth Parliament to hear young people’s voices and ensure their safety following the “horrifying” experience of Child Q who was strip-searched by the police.

She said a safeguarding first approach is needed, and that racism has to be challenged and addressed by education bosses in Hackney, as well as the police, “making sure that this isn’t going to happen in any of our schools and all of our children are safe.”

The current mayoral incumbent, Labour party candidate Philip Glanville, said: “There are wider issues about adultification [of Black children] and racism. Let’s be clear – it’s not unconscious bias, it’s bias, in our education and policing system.”

He said the council has a “no need to exclude” policy aimed at preventing children being excluded from school, but that there are still too many exclusions, especially of Black children, from secondary schools in the borough.

He said there was an “overwhelming public voice” forcing the Met Police to act.

Gwenton Sloley, standing as the Hackney People Before Profit candidate, said the mayor should work with Hackney’s borough commander, given that Detective Chief Superintendent Marcus Barnett had acknowledged the problems.

Mr Sloley founded the London Gang Exit program to help move young people at risk of getting drawn into gangs.

He said systematic racism and unconscious bias “isn’t something that has just come about.”

He went to school in Hackney and said he nearly lost his life on his nineteenth birthday “just by being in the wrong place at the wrong time.”

The Liberal Democrats’ candidate, Helen Baxter, said what happened to Child Q was the latest in “a long line of examples of racism, sexism, discrimination in institutions that people should be able to trust.”

She said: “As Mayor, you have the platform to bring people together to create outreach programmes between the police and the community. There is a huge amount of mistrust, understandably.”

Another controversial subject is the introduction of the Low Traffic Neighbourhoods (LTNs), which have been greeted with a mix of delight and disgust by residents.

The LTNs aim to reduce traffic and air pollution but some say it has just pushed the problem to other roads in the borough.

Oliver Hall (Conservative party) was unequivocal: “They are just not working”, he said, and pledged to scrap them.

He claimed that some people were still waiting for their Blue Badge exemption to allow people with disabilities to drive through the LTNs.

“What we need is a council and a mayor who listen, who  understands and actually care about the response they get, rather than forcing it through,” he said.

Philip Glanville (Labpour party) accepted LTNs have been controversial, but said they  were not the only sustainable  transport measure to tackle climate change and everyone needs to cut their use of motor vehicles.

He highlighted the existence of 48 “School Streets”, where roads are closed to motor traffic at school opening and closing times; better bike parking; and investment at Hackney Wick and Hackney Central stations.

“It’s about having a sustainable transport policy that has climate change, air quality, transport at its heart,” he said.

However, Gwenton Sloley (Hackney People Before Profit) had concerns for people living on streets with worse air quality: “Looking at the LTNs for me it comes down to where they are placed and who lives there.”

He said areas near Amhurst Road and Lea Bridge Road are “becoming nearly dual carriageways outside some people’s homes.” He said the council needs to “revisit this” and added “there’s a whole demographic and margin of people that have not been heard.”

He added: “It’s like a draw of the lottery” on where the LTNs are and the health impacts of pollution for those living on streets suffering from diverted traffic.

Helen Baxter (Liberal Democrat)  is in favour of “proper monitoring of air quality of  traffic to see what’s going on” and to make changes to the LTNs where necessary, “not to be wedded to an ideological position as the Mayor and the council is, but to be willing to learn from the evidence and make changes required.”

She said some traffic had been pushed on to main roads.

“We believe that LTNs can work,” she said, but pointed out that some residents thought the council had made up its mind about them before the consultations.

She said one of her priorities is making it easy to cycle in Hackney.

Zoë Garbett said in her first term as Mayor she would commit to cutting traffic by 40 per cent.

She supported bus priority, taking action for cyclists including safe storage, and encouraging people to move away from non-electric cars: “If this is about safe healthy streets,  we need to look at all of those options available, making our streets walkable and wheelable and decluttering our pavements.”

Responding to one of the questions on housing, the current mayor Philip Glanville (Labour party) took the opportunity to apologise to residents for delays in dealing with problems at people’s council homes.

Answering a question about how to improve the way the council tackles dilapidation, such as mould, damp and sewage leaks, in council homes he said: “I would start by apologising with the challenges around repairs to our council stock. I recognise the challenges, I’ve seen myself, I knock on doors , I listen to people and it hasn’t been good enough.

“There are a few reasons for that. We’ve had covid where we’ve only been able to do emergency repairs, and also had the cyber attack that has impacted.”

He said it was about “rebuilding trust and confidence” and  there was a turnaround plan with £1m put into repairs by the council, bringing services in-house, work to clear the repairs backlog and a 24-hour leak response pledge.

However Oliver Hall (Conservative party) said: “I don’t think an apology from the current Mayor cuts it. Too many people have been waiting far too long and he can use covid as an excuse but really, what qualifies as an emergency repair? ”

He cited the case of a resident , whose ceiling had collapsed, waiting six months, asking: “Why isn’t the council triaging in a more appropriate way for these cases?”

Mr Hall criticised the current online customer services system and said people were fed up of waiting on  hold trying to talk about problems, and pledged to reform it.

“People are being left behind,” he said.

Gwenton Sloley (Hackney People Before Profit) said he had met families struggling to get their voices heard.

He said it was one of the reasons he was standing for Mayor and said: “enough’s enough.”

Helen Baxter (Liberal Democrat) said: “It’s shocking the conditions that some people are living in in Hackney in the twenty-first century. We must enforce inspections and ensure that issues that are identified are followed up on.”

She wants  to see that the inspection reports are also shared with residents.

Zoë Garbett said: “We need a better way for families to be able to communicate that they are in urgent need, and for that urgent to be responded to.

She knew of a resident left without hot water for months, and neighbours where she lives “tell me they feel like second-class citizens.”

If you are not registered to vote the deadline is midnight on 14 April (Thursday) Register to vote – GOV.UK (www.gov.uk)