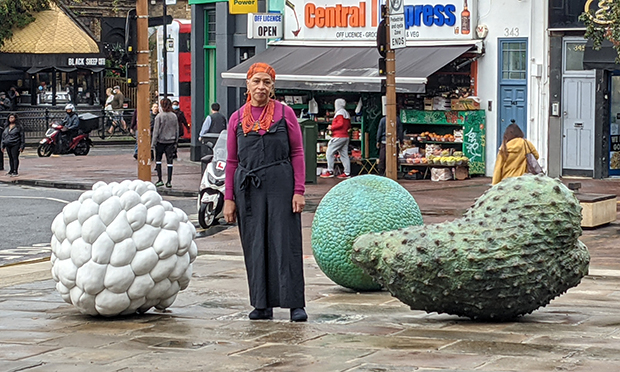 Artist Veronica Ryan with her sculptures of food inspired by her childhood trips to Ridley Road Market. Photograph: Julia Gregory

An artwork commemorating the Windrush generation is amongst sculptures shortlisted for the prestigious Turner Prize.

Veronica Ryan’s marble and bronze sculptures of custard apple, breadfruit and soursop can be found by St Augustine’s on the Narrow Way in Hackney Central.

They are part of her work which has been singled out in the nomination, along with her solo exhibition in Bristol.

The Windrush work was commissioned by Hackney council “as a permanent symbol of honour, respect and commitment to the Windrush Generations, their legacy and contribution to life in Hackney”.

The Windrush Generation is the community of people from Commonwealth countries invited to rebuild Britain after WWII.

Speaking at the Windrush sculpture’s launch in October she said:  “I used to come shopping with my mum in the Ridley Road market. It’s about fruit and veg that’s part of the local community, the local diet.

“I chose this particular group because I liked the textures, I wanted them to be interesting to engage with, they are not the same surface textures as well.”

She said it was designed for people to touch it, and encouraged Hackney residents to sit on the statues.

The winner will be announced in Liverpool in December and an exhibition of their work will be on display at Tate Liverpool from October to March next year.

A second Windrush artwork will  be unveiled in Hackney on Windrush Day in June.

This one will be at the Town Hall Square on Mare Street. Artist Thomas J Price is using  photo archives from Hackney Museum and Archives, and 3D scans of Hackney Windrush residents and descendants to create a large scale bronze sculpture.

Hackney is also planning to welcome The World Reimagined globe trails this summer. It is part of a nationwide art and education project highlighting the impact of the  Transatlantic Slave Trade.

Hackney will link up with other London boroughs, including  Westminster, Camden, Lambeth, Newham, and Southwark.

The trail in Hackney will take people on a  60-90 minute walking tour to learn more about the history of the transatlantic slave trade and the valuable contributions of diverse communities  to life in Hackney and the UK.