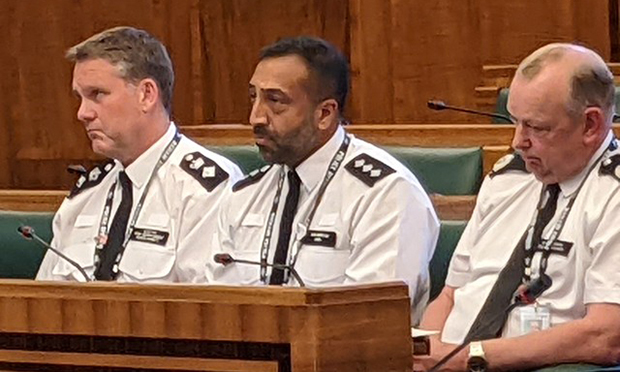 By anyone’s standards, outgoing Hackney and Tower Hamlets borough commander Marcus Barnett has had a challenging time since taking on the role in 2019.

During the pandemic, he’s had three bouts of Covid – which affected his lungs and liver – and two of shingles, while working in what he calls “one of the toughest jobs in London”.

His stint has also been marked by controversy, including calls for him to step down when the Child Q scandal emerged.

Barnett is now set to join the team working with new Metropolitan Police Commissioner Sir Mark Rowley to help get the force out of special measures.

His deputy Mike Hamer is stepping up to lead the borough command unit (BCU) for the forseeable future.

Barnett’s new role will be to look at frontline and community policing and call handling to improve the service.

The force has been hit by a series of scandals in recent times, including the murder of Sarah Everard by an off-duty officer and the Met’s handling of a vigil afterwards.

There was also the revelation that some officers at a central London police station were exchanging offensive messages, as well as the jailing of two officers who shared photos of murdered sisters Nicole Smallman and Bibaa Henry.

In Hackney, there were calls for Barnett to resign when it emerged that two officers strip-searched a Black teenager, known as Child Q , at her school whilst she was on her period and without a responsible adult present – something he said should never have happened.

It led to protests outside Stoke Newington police station and at Hackney Town Hall.

Barnett said what happened to Child Q was “regrettable”, and that a lot of work has gone into training officers following the incident. The Independent  Office for Police Conduct is still investigating what went wrong.

This spring, hundreds of people gathered to prevent an immigration arrest in Dalston. It led to an ongoing investigation after footage emerged of police allegedly hitting a man on the ground, officers getting hurt, and couriers saying they are fed up of “excessive policing”.

He pointed to improved trust and confidence ratings in Hackney.

“There’s a definite improvement because we’ve listened around stop and search,” he said. “We do less, but we have proper outcomes.”

He highlighted the work of officers “who put their lives on the line”.

Barnett said some of his biggest achievements were in tackling drugs and trafficking, driving down gang crime and county lines, getting more town centre policing in Shoreditch, and drops in burglary, anti-social behaviour and violence.

However, knife crime is increasing this year, and injuries to under-25s are also going up.

Barnett said it is “not unusual” to see young people “involved in serious violence”.

Tactics to prevent this include stop and search, engagement, and acting on intelligence.

Barnett urged communities “to step up and speak out”, adding: “It cannot be right that we end up going to calls on estates on the BCU where you’ve got 12- and 14-year-old children running around, terrorising residents with noise, baseball bats and goodness knows what else.”

He said some people are starting to get involved in robbery for the first time as crime edges back towards pre-Covid levels, and wondered if it is a “symptom of the economic crisis”.

Whilst there are challenges to come, Barnett said: “I love these boroughs. I think they are amazing. They are full of diversity. They are full of people that need and deserve fantastic policing, and I do think by and large the policing team that we have got here is amazing.”