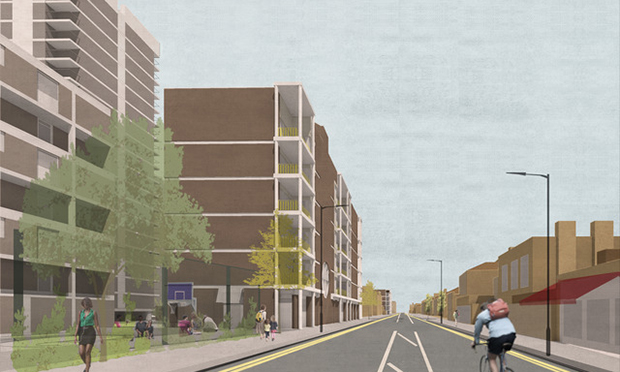 An impression of what the new blocks will look like. Image: Henley Halebrown and Stephen Taylor Architects / Hackney Council

The first stage of a council plan for new homes on the De Beauvoir estate has been approved – though some residents don’t think it is green enough.

The Town Hall will build 189 new homes in five six-storey blocks in infill sites on the estate off Downham Road, along with a four-storey terrace.

Thirty-one per cent of the properties will be for social rent, 19 per cent for intermediate rent, and the remaining 50 per cent for private sale.

It is the first stage of a multi-million pound scheme at the 1970s estate.

Rachel Bagenal, the council’s head of housing supply, told the planning committee it can only afford to build council homes if it builds properties to sell.

She said there are 34 families on the estate with “urgent” housing needs.

The scheme will see the demolition of the tenants’ and residents’ association building, which will get a new home.

A community green space will move to the site of a car park on Balmes Road, and the council will contribute £377,000 to make the estate greener and to mitigate the loss of some trees.

Eighteen trees will be cut down, and the council plans to plant 71 new ones, increasing the number of trees overall to 249.

Some residents objected to the loss of 13 mature trees and countryside charity CPRE also said it is regrettable given the importance of mature trees in combating climate change.

Planning officer Nick Bovaird said there would be a net gain in biodiversity, with “sufficient additional planting” making the loss of some mature trees “acceptable”.

It said: “The climate emergency is happening now – witness the unprecedented level-four heat alert issued last week – so it is completely irresponsible to destroy carbon-sequestering mature trees and two thirds of this green space.”

The residents added: “The council is making great strides to address the crisis in other areas and the residents are just asking for consistency in this respect and for it to be sincere in its aspirations for social justice and equality in access to nature.”

They were “very distressed” by the loss of a green space and its importance for offering “some respite”  of the urban heat island and flooding.

“The loss of biodiversity would be immense,” said Cllr Garbett.

Speaking in favour of the plan, ward councillor Polly Billington (Labour) said there are 3,000 people in temporary homes, “many of whom are living only hundreds of yards” from the site.

She said families are overcrowded in one-bedroom homes and there are 13,000 on the council waiting list, and the new homes could help alleviate this.

“The only thing we can do in the long term is to build more genuinely affordable homes,” she added.

She said the new homes would mark the end of “older sons sleeping on sofas, mums sleeping head to toe with toddlers, and children with special needs finally getting the space and support they need”.

Billington explained that residents helped draw up the blueprint for the site and said she was proud it would see more trees, more green space, and more play area for children.

The council was ticked off by the planning committee for putting in “hard to use” two-tier bike parking, but the response was that it is needed because of space constraints.

The plan was unanimously passed by the planning committee.