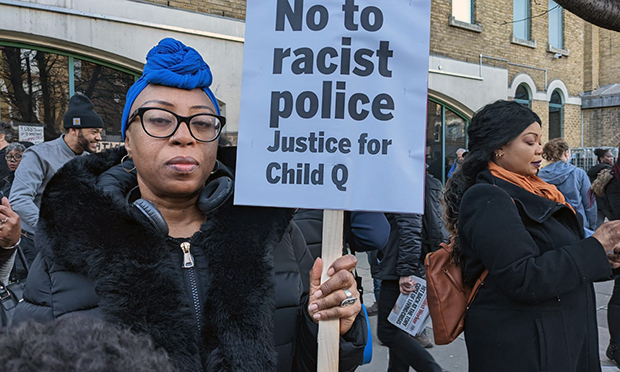 Protesters took to the street when the treatment of Child Q came to light. Photograph: Julia Gregory

The officers who strip-searched a Black teenager in her school are being investigated to see if they are guilty of “gross misconduct”, a police watchdog has revealed.

The update into the Independent Office for Police Conduct’s (IOPC) investigation into the case of the 15-year-old girl, known as Child Q for legal reasons, was given at a scrutiny meeting at the Town Hall last night.

The teenager was removed from a mock exam in December 2020 and strip-searched after school staff thought she smelt of cannabis. She was having her period at the time.

She has previously detailed the devastating effect the search had on her: “I can’t go a single day without wanting to scream, shout, cry or just give up.

“I don’t know if I’m going to feel normal again. But I do know this can’t happen to anyone else, ever again.”

At yesterday’s special scrutiny meeting into the Child Q scandal, Hackney’s borough commander Marcus Barnett told councillors: “It is beyond regrettable that it ever happened to a young child.”

The IOPC said it is now investigating if what happened was gross misconduct, rather than misconduct.

The Mayor’s Office for Policing and Crime (MOPAC) also confirmed that the IOPC  has “recently uplifted the level of their investigation to gross misconduct”, but added: “No decision about the level of misconduct proceedings the officers will face has been made.”

Jim Gamble, who led a City and Hackney safeguarding review of the scandal, said: “It was critical that it was a watershed moment.”

The report, which was published in March, sparked a series of protests by parents, young people and campaigners.

It said it was “likely” that racism played a part in what happened.

Gamble added: “The family felt that the impact on them was racist. They made that clear.

“Ask yourself this question: would this have happened to a 15 year-old white girl in another borough? The answer is no.” 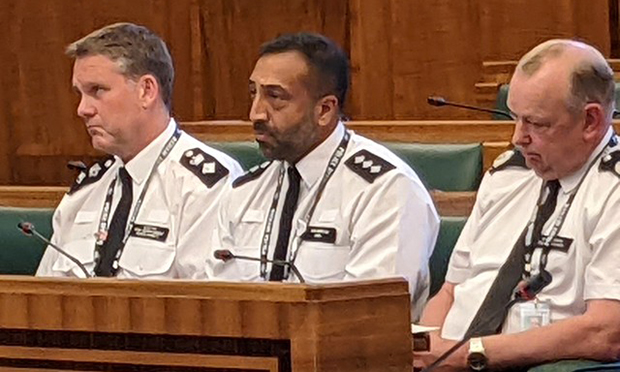 Barnett said the incident has caused “anger and anxiety in the community”.

He said police have worked with the council on addressing concerns about racism and safeguarding, with officers this week starting training to tackle adultification – treating children, particularly Black children, as adults.

The force is also working on more community engagement with young people and organisations including Voyage, and explaining why police use stop-and-search.

Another change means higher ranking officers now have to be involved in overseeing an intimate body search like the one carried out on Child Q.

Barnett said there have been seven similar searches involving children in the last year in Hackney.

He said he could not rule them out entirely because young people could be exploited into carrying drugs or weapons, but stressed they are very rare.

Cllr Anntoinette Bramble, Hackney’s deputy mayor with responsibility for  education, young  people and children’s social care, said: “An indefensive, inconceivable thing happened. In 2022, we are still judged by the colour of our skins.”

Cllr Bramble added: “You cannot underestimate how many people have been triggered by this. They said they are not surprised.”

She said work must continue to tackle the disproportionality of global majority children being excluded from school and stopped and searched.

She outlined work being done with teachers, governors and students to ensure their voices are heard.

Last week, the council hosted an information event for parents and carers.

Other work includes a community resilience meeting that will draw up an action plan, and a recent anti-racism conference.

MOPAC will be surveying Hackney residents to find out what they want from the police and to get their views on building trust and confidence “so the Met can understand what local people want”, according to director of strategy and oversight Kenny Bowie.