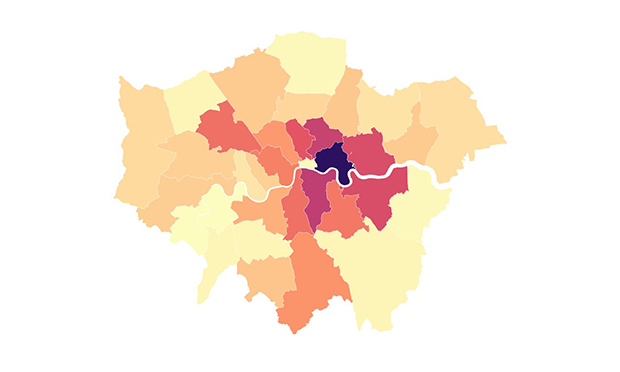 The country this week marked the fifth anniversary of the Grenfell Tower fire that claimed 72 lives and left a community devastated, and renewed attention is being paid to the safety of buildings.

London is at the forefront of the crisis, with more than 1,000 buildings having been identified as containing serious fire safety defects such as flammable cladding, combustible balconies or missing fire breaks.

Residents of such buildings must evacuate in the event of a fire, which could spread quickly, and are alerted either by a waking watch patrol or a common alarm system.

But it is the residents themselves who are often left with the financial burden of such measures, which can cost thousands of pounds.

Recent figures provided by Mayor of London Sadiq Khan have revealed the London boroughs that contain the greatest number of buildings that have such measures – called simultaneous evacuation orders – in place.

In Tower Hamlets, 165 buildings have simultaneous evacuation orders in place having been identified as fire risks by the London Fire Brigade. Of those buildings, 12 are below 18 metres in height, meaning leaseholders are unable to apply for the government’s Building Safety Fund, which covers the cost of removing flammable cladding from residential tower blocks.

The second and third most affected boroughs are Southwark and Hackney, with 94 and 87 fire-risk buildings respectively.

In Islington, 30 of the 63 buildings identified as having fire safety defects are below 18 metres in height, excluding them from the Building Safety Fund.

Responding to the figures, Clarke said: “Everyone deserves to feel safe in their homes. The government must extend remediation support to all residential buildings with safety defects or combustible cladding, regardless of height.

“The Building Safety bill was finally passed last month, but many measures will take a year to 18 months to introduce. It’s not good enough. Ministers have to act now so people aren’t living in fear for another five years.”

Those living in buildings that require a 24-hour waking watch are eligible to apply for the government’s £30 million Waking Watch Relief Fund for money to replace the expensive patrols with common alarm systems.

However, just 83 grants from the fund have so far been paid out in London.

A government spokesperson said: “The Grenfell Tower tragedy must never be allowed to happen again and our thoughts are with the bereaved families, survivors and residents.

“So far, 45 of the UK’s biggest housebuilders have signed our developer pledge and will contribute £5 billion to fix their unsafe buildings. We expect them to work swiftly so people feel safe in their homes, and we will be carefully scrutinising their progress.

“The Building Safety Act brings forward the biggest improvements in building safety for a generation, giving more rights and protections for residents than ever before.”