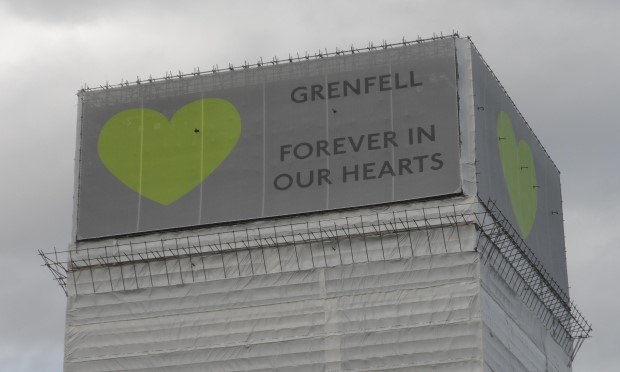 Grenfell Tower, pictured a few days after the one-year anniversary of the tragedy. Photograph: Carcharoth

Safety campaigners are mounting a legal challenge to make the owners of high-rise buildings draw up evacuation plans for vulnerable residents – a move recommended by the Grenfell Inquiry.

The UK Cladding Action Group said the government’s decision not to follow the recommendation is “a shameful betrayal of all who lost their lives and loved ones five years ago and those living in fear today”.

Fifteen of the 37 disabled residents of Grenfell Tower died in the 2017 disaster. The fire claimed the lives of 72 residents.

These could include handrails, ensuring the edges of stairs are clearly marked, and evacuation chairs.

Details of vulnerable people could also be made available in premises information boxes (PIBs) outside residential buildings.

A petition has also been launched calling for a parliamentary debate into the use of PEEPs. If it gets 100,000 signatures, MPs will discuss it in the House of Commons chamber.

Some councils have already drawn up PEEPs for residents.

Hackney has 106 PEEPs for council residents, according to its response to a Freedom of Information request this year, including several for people living on the ground floor.

Camden Council told the Citizen it has plans for 99 residents in blocks ranging from one to 19 storeys.

According to data supplied after a Freedom of Information request, the council had created PEEPs for people with mobility issues, eyesight problems, or who are frail.  Some residents are bedbound or wheelchair users and others need help because they have dementia, according to the data.

Three Camden Council residents also have PEEPs because of concerns over hoarding.

The government said mandating PEEPs “could in fact have a detrimental effect” and increase the risks to vulnerable people.

It said a past consultation had highlighted concerns that “not only could evacuation not always be necessary, but it could also increase the risk of harm to those being evacuated, or those assisting in the evacuation”.

It is holding a new consultation about the best way to protect people who cannot self-evacuate.