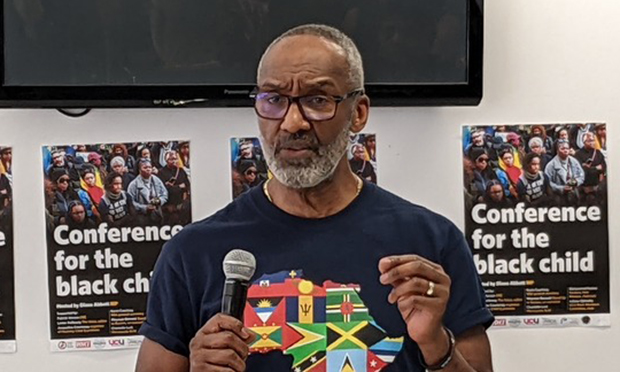 A former Hackney superintendent who used to select police officers to be stationed at schools has told campaigners that he is now opposed to the strategy.

It follows an outcry over the strip-search of a Black teenage girl, known as Child Q for legal reasons, in her Hackney school.

Leroy Logan served with the police for 30 years and founded the Black Police Association. He was a superintendent at Stoke Newington police station between 2004 and 2007.

He told campaigners, teachers and parents at the Conference for the Black Child, held in Stoke Newington last Saturday, that he has changed his mind.

He said: “I now even think that police officers should not be in schools. I agree with that now. I would not have agreed with that a few years ago. I used to select the officers to go into schools.”

He said it was a protective role and “not there to demonise” young people.

However, he now fears that “trust and confidence” in the police is eroding.

Logan, who was awarded an MBE for services to policing and the community in 2000, said that “as a grandfather” he has been stopped and searched by police.

Stand Up to Racism, which organised the in-person and online conference with Diane Abbott MP, wants to see the end of safer schools police.

Weyman Bennett, a member of the campaign group, said he wants to see resources put into mental health and youth workers rather than police.

The pandemic has seen increasing demand for mental health services for young people, whose education was hit hard by lockdown.

Child Q, a 15-year-old girl, was taken out of her mock exam and strip-searched after teachers called the police over concerns that she may have smelt of cannabis. No drugs were found and her family was not informed. There was no appropriate adult present.

The Independent Office for Police Conduct (IOPC) is investigating, and the officers who carried out the search have been removed from frontline duties.

Concerned community members staged protests outside Stoke Newington police station and Hackney Town Hall to express concern over what happened to the child.

Stand Up to Racism wants the officers who searched Child Q to be dismissed.

Bennett said: “It’s the lowest of the low to strip-search a child who can’t defend themself.”

Diane Abbott told the conference: “It seems extraordinary to me that the two police officers involved in this incident have not been disciplined in any way.”

She said: “I do not support police in schools. It seems to me that they are not there for the benefit of the children.”

Abbott said she did not see police at schools with mainly white pupils.

She said police cannot stop and search adults over the smell of cannabis “so why on earth were they called to a school”.

He said they face discrimination and “adultification” – when children, especially Black youngsters, are treated as adults.

Julie Mukherjee, a National Education Union rep at a Hackney school, said: “We do not want our children to be stopped and searched on their way to college and when they get to college to be confronted by police officers.”

Hackney’s borough commander Marcus Barnett has previously said police based in schools play an important role and can help understand the culture in a school community.

He also said the police need to await the outcome of the IOPC investigation.