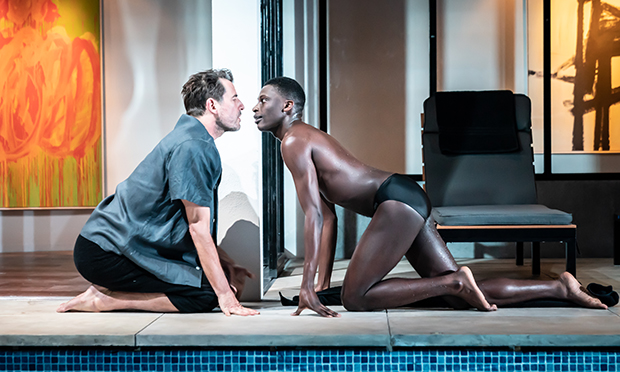 American playwright Jeremy O. Harris’s Daddy overflows with ideas, beauty, and contradiction. It is too much, in both a positive and a negative sense.

The link with Hockney is both visual and thematic. Harris asks the reader in the ‘Notes on style’ section of the play to google the famous 1972 painting Portrait of an Artist (Pool with Two Figures). I’ll wait for you. Done? Great, so that’s the visuals covered, but what’s beneath this picture speaks volumes.

In the painting, 19-year-old model Peter Schlesinger (the artist’s lover) is getting out of gallerist Nicholas Wilder’s pool. Youth, art, money, power, homosexuality, and the grand old USA.

In the play, everything happens by this azure blue pool. Characters dive in and out, or dawdle on the edge. Our lead, Franklin, is most prominently semi-naked, an object of sexualisation in very tight Speedos. The spectre of sex is always lurking somewhere in those temperature-controlled waters.

What Harris adds into this mix, and what reinvents the story (from simply an exploration of the painting), is the dimension of race. We see the young, Black artist Franklin, played by Terique Jarrett, try to create a form of domesticity with an older European art dealer, Andre, played by Claes Bang. It narrows in on an interesting part of the gay community; the taboo and often maligned world of intergenerational relationships and role-playing.

So far so good, and there is so much good.

Harris’s writing is challenging, poetic, angry and vulnerable, but without edit. Danya Taymor’s directing leans into the dreaminess of the story, the constant discussion of the ephemeral art world within the hard lines of this American dream house.

The play is refreshingly melodramatic (eponymously mentioned). Characters break into song, dance, with a particularly lovely use of the spotlight on Jarrett, and a knowing flick of his eyes, aware of being observed. A snappy section of theatre rule-breaking.

The characters play with the clearly unnatural lighting and sound effects, and the height of this is the chorus (Rebecca Bernice Amissah, Keisha Atwell and T’shan Williams). The gospel singers are first in the background for the phone calls from Franklin’s disproving mother, and then get down and dirty in the hilarious rendition of George Michael’s ‘I Want to be Your Father’. A very kinky Ballard lead by Bang. Like the three witches of Macbeth but with funk!

Performance-wise, some complex American stereotypes are recirculated, deconstructed, and shattered.

Bang, as the looming and at times violent “daddy” possessive, is deeply worrying. Sharlene Whyte is the prayin’ ‘n’ preachin’ religious southern matriarch coming to save her baby from an unhealthy relationship. Humorous and full of lyrical truths, she shows more understanding of sex than we give her credit for. Jenny Rainsford disgusts and delights as a truly despicable gallery owner, lovingly crafted from the depths of the art world. John McCrea and Ioanna Kimbrook as Franklin’s deliciously shallow LA friends show hidden depths when the script allows them.

The overarching depiction of the queer Black American experience is singular; Franklin’s absent father and almost too present mother, caught between not enough love and too much. The neoliberal way in which white characters interact with his pain is incredibly subtle but searing.

Disappointingly, the play deals with the inequality between Franklin and Andre obviously, and it doesn’t travel very far. Operatic in scope, but limited by the simple size of the stage, the play is stuffed full of so many concepts.

After the first act, it’s hard to see how everything makes sense. The explosive conclusion flounders in a surging sea of conflicting plots and story arcs. It is simply too long and too busy, so the beauty and undeniable skill of this production is watered down.

No amount of nudity, Speedos, sex, chorus numbers and divine lights can rescue it, despite it pulling everything out of the hat in trying.

Daddy – a melodrama runs until 30 April at the Almeida Theatre.

← ‘Terrifying but fun!’: Hackney chefs crowned UK student champions after live cook-off judged by Michel Roux JrChildren as young as 10 have been strip-searched by the Metropolitan Police, figures show →