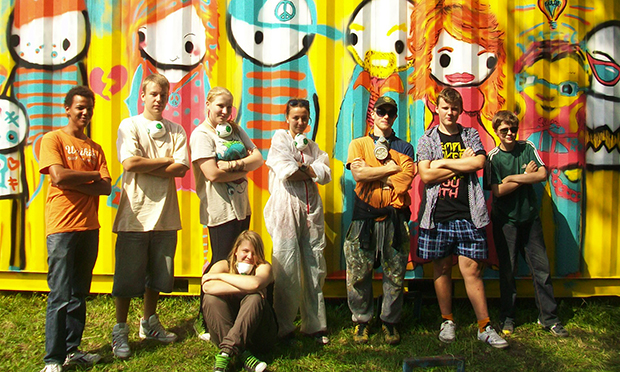 Stik (third from left) pictured in 2011 with the kids who collaborated with him on the mural. Photograph: Stik

A mural created by acclaimed Hackney street artist Stik and a group of Polish children is set for a long-awaited homecoming after going missing from an art gallery in Gdansk four years ago.

The 45-metre artwork, titled It’s Complicated, was painted on two steel shipping containers in 2011 for the Brit-Cult Festival at Łaznia Centre for Contemporary Art.

It featured dozens of the artist’s iconic stick figures interacting and holding hands.

Stik only found out that the mural had been removed in 2015 when several sections of it were spotted in Andrew Lamberty’s art gallery in Belgravia – going for £10,000 a pop.

It was later discovered that the mural had been cut in 29 places, and that many of the fragments had already been shipped off to various buyers.

The artist, who only authenticates the sale of his public artworks when it benefits the local community, has since been involved in a mammoth tug of war with Lamberty over the work.

The children who painted part of the mural with Stik also launched their own petition in 2016 calling for its return, as well as penning an open letter to Lamberty. 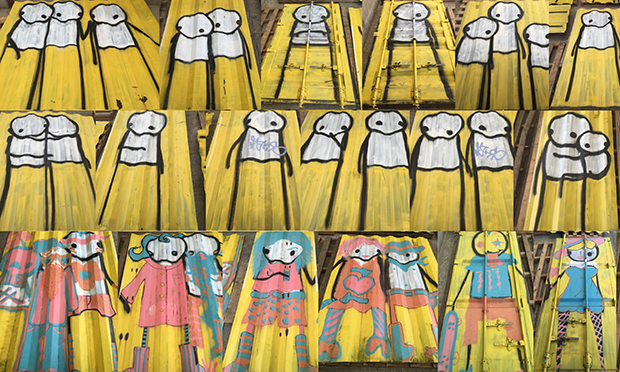 The pieces of the mural have now been rounded up, ready for the restoration. Photograph: Stik

Yesterday, Stik told the Citizen he has finally reached an amicable settlement with the gallery owner which will see the entire artwork restored to its former glory at its original home in Gdansk next summer.

He said: “It’s taken four years to reach an agreement for the return of this mural, with lots of back and forth. I’m very happy to see the piece going back to its original home, where it belongs, with the community that painted it with me.”

The mural will be relaunched at Łaznia Centre in July, with Stik planning to travel back to Gdansk to help oversee the welding and restoration work.

He added: “It’s been a long journey getting it back but I’ve made lots of friends along the way. This is an exciting step forward for artists’ rights.

“The kids, who are adults now, were instrumental in pushing for the artwork to be returned.”

Andrew Lamberty released a statement which reads: “It became apparent to me that this important work needed to be returned to Gdansk, where it belongs.

“It has been a lengthy process retrieving the components from different sources. We now potentially have a happy artist and a happy local community, which is a happy result.”

Stik said he was “very grateful” to the Citizen for supporting the campaign to return the artwork, adding: “I used to have a column in the Citizen and the paper was important for the politicisation of my art.”

The artist, whose sculpture recently fetched £150,000 at auction for a homelessness charity, commented for the Citizen on topics ranging from Hackney doctors’ concerns about the NHS to the criminalisation of the borough’s youth.