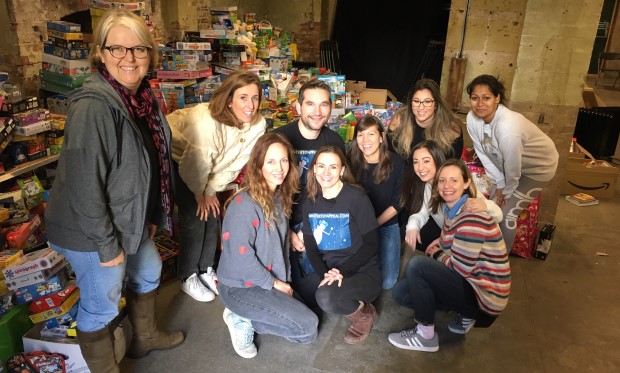 Thousands of Hackney’s poorest children will have a special gift to open over Christmas thanks to the overwhelming response to this year’s winter toy appeal.

Around 5,000 gifts were donated to the Winter Toy and Food Appeal, which is being run for the fifth year in a row by family network StokeyParents and its sister firm Local Buyers Club – with support from Location Location estate agency.

A team of volunteers spent four days sorting through the donations and distributing them to around 4,000 children across Hackney, Islington and Haringey.

A video provided to the Citizen by the organisers gives an insight into what a mammoth task that is.

Local Buyers Club boss Basil Fansa, who launched the appeal with his wife and StokeyParents founder Jenna, said: “Taking the toys to social workers, children’s centres, schools, food banks and those running women’s refuges has been one of the most moving experiences of our lives.

“The quality of gifts this year was wonderful and our thanks go to everyone who donated, to the Ivy Street Family Centre who distribute most of the toys and to the army of volunteers who helped us.”

Presents were delivered to food banks, children in temporary housing, those fleeing domestic violence and living in refuges, and to dozens of other agencies that support families in poverty.

Claire Reay, manager of the Ivy Street Family Centre said: “For lots of the children this is the difference between Christmas and not-Christmas.

“We know that for a number of children the only gift they receive will be through this appeal.”

The appeal also collected the equivalent of over 800 meals for Hackney Food Bank.

For more information, head to wintertoyappeal.com

← Carved-up Stik mural to get Polish homecoming after four-year wrangle with London gallery bossHappy Christmas from the Hackney Citizen! →