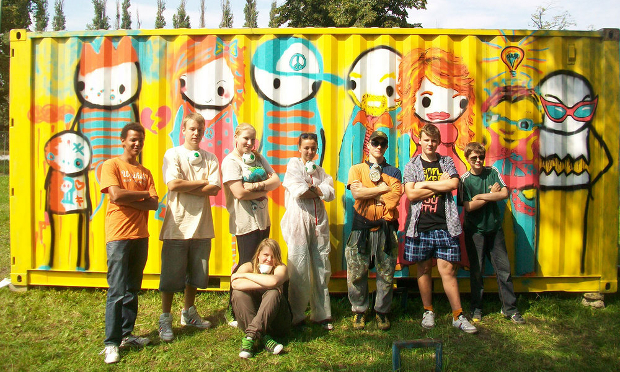 A community mural by renowned East London artist Stik should be returned to the town in Poland where it belongs.

So say a group of young Poles who are petitioning for the return of the ‘Children’s Community Mural’, which went missing from the town of Gdansk in 2014, only to resurface at the Lamberty Gallery in Belgravia.

Stik, who uses his art to promote community cohesion, painted the mural with a group of local children on a shipping container in 2011.

Stik is said to have agreed to paint the mural “for educational purposes only” as a gift to the town.

It was commissioned by Polish gallery Laznia and part funded by the British Council.

Stik was therefore outraged to find that pieces of the mural were being sold by Lamberty gallery in Belgravia for £10,000, and has vowed not to authenticate the remains of the artwork.

Following stalled discussions between Stik and antiques dealer Andrew Lamberty, the “young people of Gdansk” are now taking matters into their own hands.

“We don’t want the work to be used by a stranger for commercial use or to be put up for sale,” their Change.org petition reads.

“The artwork we made with Stik was about community and being together but it has been cut up. Now it’s about splitting community to make money, a sad symbol of today’s world.

“We are demanding for the mural to be sent back.”

In a statement, Lamberty offered to return the parts of the mural that were painted by local children “for the enjoyment or benefit of the local school community”.

However, a condition for this would be Stik authenticating the remaining pieces of the mural – the parts Stik himself had painted.

This would see their material value rocket, but Stik told the Hackney Citizen that he has declined to do so as “the works are mutilated and are being investigated by the Polish authorities”.

Lamberty’s statement argues that the containers did not belong to the Polish gallery so they had no right to commission a mural on them.

He says his gallery legally purchased “the works” (when Lamberty bought the mural it is understood to have already been carved up), with full documentation.

The case, which has been referred to lawyers, brings to light the nebulous and philosophical question of who ‘owns’ street art, and what value it has when removed from the context it is painted in.

A Banksy mural that appeared on the back of an amusement arcade in Folkestone sparked a ground-breaking legal dispute in 2015 between the tenant and landlord of that property.

Both claimed ownership of the mural, with the tenant claiming their obligation as leaseholders to keep the property in a good state of repair justified their actions in physically removing the Banksy and shipping it to the US to be offered for sale at auction.

This work by Banksy is now reportedly in the process of being returned to the seaside town, after the judge ruled that the landlord, as owner of every part of the property, had the greater claim to it.