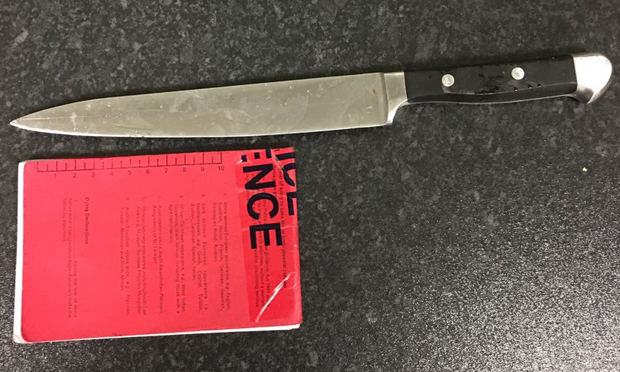 “Monster”: the knife involved in the Dalston row. Photograph: Met Police via Twitter

Two teenagers aged 16 and 17 have been arrested for “waving” a kitchen knife around during a fight in Dalston.

The incident occurred near Dalston Kingsland station, towards the early hours of the evening on 18 May.

Police recovered the blade, which was more than 10 inches long.

16 and 17 year olds arrested in Dalston Kingsland earlier this evening. Waving this monster about during a fight. #StopKnifeCrime #ResponseD pic.twitter.com/vmOZYKghZQ

In a tweet published at the time, Hackney police said: “16 and 17 year olds arrested in Dalston Kingsland earlier this evening. Waving this monster about during a fight.”

Knife crime is on the rise in the capital, and a series of stabbings of youngsters have caused alarm among officers.

Earlier this month, a 12-year old was caught carrying a 20cm blade following reports of an alleged robbery in Stoke Newington.

Just days after, a march from Islington to Hackney organised by grieving mothers who had lost their children to knife crime saw hundreds of people calling for solutions in the borough.

#EnoughIsEnough with @thecribyouth marching for our Young People, uniting ad a community! No more deaths to gun and knife crime pic.twitter.com/QOfLjUNvCG

Police in the capital are trying to tackle the problem by reviewing its anti-knife initiative Operation Sceptre. Launched by the Met Police in July 2015, the initiative aims at reducing knife crime and the number families affected by knife crime across the whole of London.

New measures include encouraging schools to install metal-detecting knife arches and increasing the stop and search in knife hotspots.