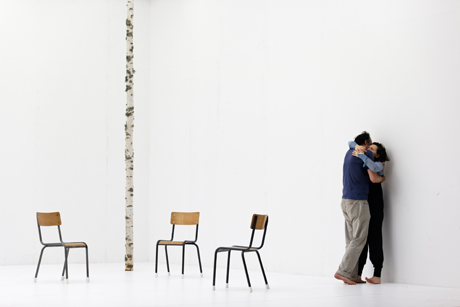 Sweden’s greatest dramatist meets one of France’s most celebrated actresses as Juliette Binoche plays Mademoiselle Julie in a production of August Strindberg’s famous play this month at the Barbican.

The classic nineteenth century play, often seen as a seminal work at the crossroads of modern theatre, pits class and social conventions against love and desire, asking questions about gender, capitalism and the power structures between men and women.

Miss Julie is a wayward, independent, proto-feminist, whose strong notions of her aristocratic lineage give way to her desire for Jean, a servant who seems equally infatuated with her.

It’s an intimate piece, set in the late nineteenth century with all the action on stage taking place in one room, but director Fishbach didn’t feel constrained by such considerations.

“For our production we changed the period, it’s in the present, and we discovered it works well,” he says. “The war through the language between Miss Julie and Jean is still true.”

Finding a way of staging the play that suits a modern, film-watching audience, was also on Fishbach’s mind. “The play takes place while a party celebrating mid-summer goes on,” he adds.

“Normally in the play you never get to see the party, but I decided to represent it and to show everything. So in the beginning there are twenty people on stage and it’s difficult to see who is who.

“A set designer created a white box stage divided in two – the one closest to the spectator is the inside of the house and the other – the biggest one – is the garden and the outside. But this box is behind glass so you can see through it but there’s less sound, like when you’re walking in the street and you hear a party in a flat.

“The main characters have microphones, giving you two layers of sound. We wanted to create a feeling of déjà vu for the spectator. In the party two people seduce each other, but they are not alone- all of us have been to parties. ”

Having Juliette Binoche to play the lead made the production a big draw when it premièred at the Festival d’Avignon in 2011. According to Fishbach, Binoche lives up to her star billing.

“Of course, she’s an incredible actress,” he admits. “It’s easy to direct her because she’s always at work, doing research and proposing things all the time.

“She’s working with two theatre actors who are very strong too, and it was very interesting to observe how they work together as they try to mix up stage and screen styles of acting.”

The original cast will appear at the Barbican, with Juliette Binoche joined by Nicolas Bouchaud as Jean and Bénédicte Cerutti as Christine.

The time the cast spent apart, Fishbach claims, has only improved their on stage chemistry.

“When we restarted eight months after Avignon I was so impressed because the actors came from making different movies or plays and were tired, yet they were clearly happy to be working together.

“I found that all the moments in play that were previously a bit difficult evaporated – it became completely new and fresh. I hope it will be the same in the Barbican.”

Mademoiselle Julie is playing at the Barbican from 20 – 29 September