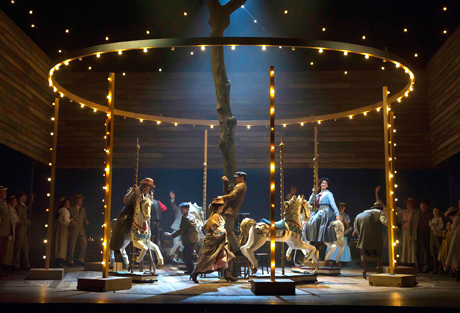 Rodgers and Hammerstein knew what they were doing in 1945 when they chose to follow up Oklahoma! with an adaptation of Ferenc Molnár’s 1909 play, Liliom.

The resulting musical, Carousel, became a twentieth century classic, though audiences of the present century may not be quite as ready to accept its rom-com sentimentality or the schmaltzy patter of its principal love story.

It also heightens the levity of ‘June Is Bustin’ Out All Over’, with its berets, buckets and energetic dancing. But in the intimate, conversational ‘If I Loved You’, there’s too much tonal distinction between the singing and speaking making you disassociate the song from the characters’ situations.

The story is set on the Maine coastline, though it doesn’t take a trained ear to hear that the actors are not from there.

The set features a backdrop of the sea, and the stage revolves around at the beginning, representing barker Billy’s carousel. A ring of bulbs lighting the top of the carousel later becomes the light of heaven’s backyard, a place Billy needs to negotiate before redeeming himself and saving his family.

In Act II, he watches Louise, the daughter he never knew, in a display of ballet that later wins the biggest cheer.

The music is low and you can hear the footfalls of the young dancers as they perform a well-executed series of moves – leaping and lifting, swooshing and darting.

The comedy of the secondary love story, a parallel plot line between Julie’s friend Carrie Pipperidge (Sarah Tynan) and Mr Snow (Joseph Shovelton), is a well-judged antidote to the sappiness.

Their on screen chemistry and singing voices outstrip the leading pair, and the order-obsessed Mr Snow, who zealously plans his life out in a black pocket book, is like a humorous Dickensian caricature.

Carousel will never tax your mind, though its definition of love may trouble it, as Julie muses: ‘It is possible for someone to hit you so hard and for it not to hurt at all.’

But for all its ‘old-fashioned ways’, Opera North’s production is solid and faithfully rendered. It ambitiously executes a synergy of opera, ballet and musical theatre, although it adds little else – unless you’re already a convert.