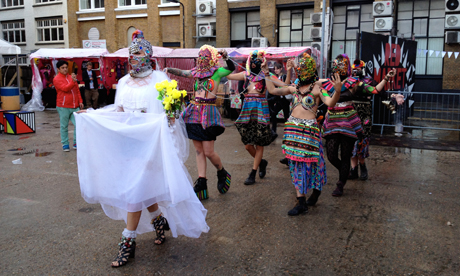 Bunting has been a familiar site around London this summer, but the bunting at the Hackney WickED weekend was combined with a graffiti paint jam, arresting performance art, live music and spoken word performances – creating a fresh and colourful festival atmosphere to showcase the artists of Hackney Wick.

The Hackney WickED festival was set up five years ago to support and celebrate the thriving artistic community of the Wick. This year, holding the festival in Hackney Wick during the Olympic Games was met by opposition from local councils.

This meant that the ten licenses required for the festival could not be obtained. Organisers were also unable to secure the financial support necessary to continue.

Rather than abandon the festival altogether, they instead opted to run a year-long programme of events including exhibitions, films, open studios, and the WickED weekend at Red Market just off Old Street.

Outdoor festivals in the UK often have to contend with the weather, and this was no exception – dramatic downpours on Saturday meant the planned live music had to be cancelled to avoid damage to equipment.

Nevertheless, there were still treasures on offer – those who braved the rain could see spectacular walkabout performances from the House of Dolls, and an intriguing standing sculpture by Adam McAlavey, whilst the graffiti paint jam grew and grew.

The Red Gallery next door was open all weekend, showing an exhibition of film and photography.

Fete for the Wicked, an artists’ market, gave festival-goers the opportunity to browse artist-run stalls, with plenty of goods available to buy including prints, ceramic art and ‘zines.

On Sunday, and with the sun shining, the Red Market was full of happy punters. Graphic-patterned primary coloured tables and chairs housed occupants listening to music, partaking in frozen cocktails, and watching a zebra take shape on the wall.

Delicious street food was eaten, and the whole festival was child friendly, boasting an urban beach and the opportunity for children to exercise their creative impulses with some wild and wonderful hat-making.

Organisers were pleased with the weekend. “Everybody is enjoying the relaxed atmosphere” said Laura May, co-founder of Hackney WickED.

Whilst she acknowledged it was a shame the festival hadn’t been able to take place where the artists actually live, she maintained that “Hackney WickED is about the artistic community coming together to show what it’s doing, and involve the rest of the community, which our programme of events has still managed to do.”

The next event in the programme will be the Open Studios, which as Laura May said, “will be similar to the usual Hackney WickED festival, just without the extra entertainment going on in the street”.

Twenty studios across Hackney Wick and Fish Island will be open, allowing people to take a tour through the industrial spaces that house this hugely diverse and creative artistic community.

The Open Studios take place on 22 – 23 September, with a private view on Friday 21 September from 6pm to 9pm.