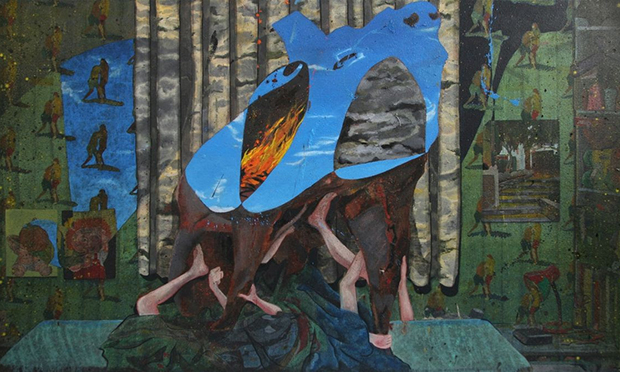 In The Blackness of the Night, 2022. Image: Marcus Cope / courtesy PEER

Hoxton Street’s PEER Gallery has announced the latest in its line-up of solo shows this year.

Silver Linings opens on the 28 April, and will comprise a series of paintings by Bath-born artist Marcus Cope.

Cope’s practice is described as “taking messy memories and committing them to canvas”.

The artist explores events from his own life, including surreal encounters while travelling, domestic frustrations, and the emotional violence of his upbringing in this, his first institutional solo exhibition.

Visitors are invited into his self-reflective world, with artworks revealing specific memories that have had an impact on him.

One painting, Loaf, for example, depicts the memory of some bread he was given by a stranger in Cyprus – a memory which in turn became central to his understanding of the situation surrounding a relationship breakdown.

The show’s largest work, In The Blackness of the Night, uses his quintessential colourful, stylised mode of work to conjure the image of the artist’s childhood bedroom. It invites viewers to experience the darkness, discomfort and conflict of his early years.

Cope was born in Bath in 1980, and now lives and works in London. He trained at Coventry University, from which he received his BA in 2002, and then Chelsea College of Art and Design, London, where in 2006 he received an MA.

He has featured in a number of group exhibitions across Europe and, alongside his work as an artist, co-founded and curates the Marmite Prize for Painting.

PEER Gallery, located in the heart of Hoxton Street, is an independent arts organisation that has established strong roots in the local community over the last two decades.

The venue has hosted a number of solo shows over the last few years, including several that were accessible from the street during the three national coronavirus lockdowns of 2020 and 2021.

Silver Linings by Marcus Cope runs from 29 April until 11 June.

← ‘No excuse’: Three hundred council workers strike over payChild Q: Headteacher of school where Black teenage girl was strip-searched steps down due to ill health →