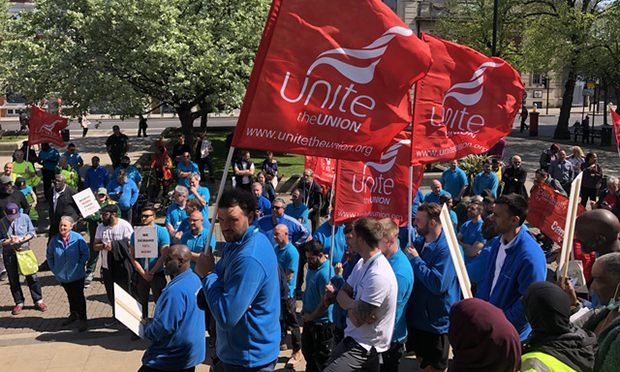 Three hundred Hackney Council employees have gone on strike in a row over pay.

Unite union members who work in waste collection, repairs, and passenger services for children with special needs, are staging the strike.

They say the council’s 1.75 per cent pay award “represents a real terms pay cut” because the retail price index hit nine per cent in March.

The cost of living crisis means their household budgets will be hit hard, they add.

Workers staged a protest outside Hackney Town Hall last week, ahead of six days of action.

They are on strike for three days until 27 April and from 3-5 May, and say they are considering further strikes if they cannot reach an agreement with the council.

Unite’s national lead for local government, Onay Kasab, said: “Hackney has the third highest number of six-figure-salaried directors out of any borough in the country.

“The Mayor is refusing to negotiate or listen to the demands of key workers that kept vital services going during the pandemic, instead expecting them to accept becoming substantially poorer than before the pandemic.

“There is no excuse – if six-figure salaries are good enough for directors, then our members should not face what is a real term pay cut.”

He said the council has £300m in unuseable reserves and he wants it to use some of that for a pay deal.

Town Hall bosses say some transport services for children with special educational needs will be rescheduled, but urgent repairs will go ahead.

The council expects its rubbish and recycling collections to “operate as usual”.

Finance director Ian Williams said the council cannot make a local pay award: “We know that the cost of living crisis is affecting our staff and understand their concerns. However, pay for council staff is decided at a national level, and we’re not able to make local pay deals.

“National negotiations concluded in February, and staff covered by the National Joint Council agreement have already received the increase in salary agreed with unions, and back pay for the last financial year. “

He urged Unite to reconsider the strike, which he said “will affect the vital frontline services that residents, including those who are vulnerable, rely on the most”.

← Children as young as 10 have been strip-searched by the Metropolitan Police, figures show‘Messy memories’: Artist Marcus Cope gets personal in solo exhibition at PEER →