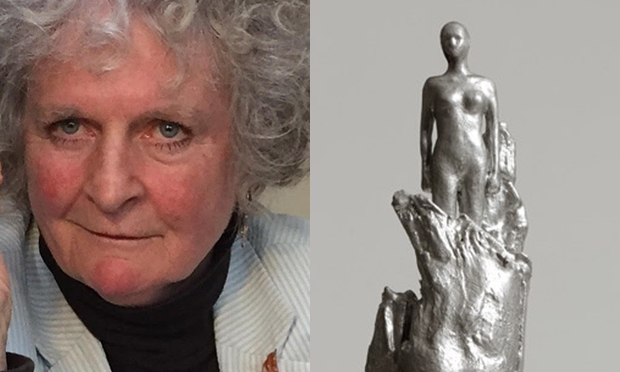 ‘Excited’: Maggi Hambling and a model of her winning design. Photographs: MOTG

Celebrated sculptor Maggi Hambling is “excited” after being chosen to create the world’s first statue of renowned feminist Mary Wollstonecraft on Newington Green.

The Mary on the Green (MOTG) campaign, which has been calling for a permanent memorial since 2011, shortlisted its two favourite designs in March.

Today, MOTG announced that its judges had picked Hambling’s effort over that of another of Britain’s leading artists, Martin Jennings.

Hambling, 72, whose public works include a sculpture of Oscar Wilde in Covent Garden, said: “”I’m really excited at the prospect of realising my idea, inspired by the trailblazer Mary Wollstonecraft.

“I hope the piece will act as a metaphor for the challenges women continue to face as we confront the world.”

Hambling’s design shows an everywoman figure emerging from organic matter – a nod to both Newington Green’s reputation as the birthplace of feminism and Mary Wollstonecraft’s claim to be “the first of a new genus”.

The piece will also feature Wollstonecraft’s famous words: “I do not wish women to have power over men but over themselves.”

The seven-strong judging panel, which included leading MOTG members, gallery curators and a sculptor, was unanimous in plumping for Hambling.

One of the judges, Jude Kelly, who is artistic director at London’s Southbank Centre and also a patron of MOTG, said: “Maggi Hambling, herself a modern legend, is a wonderful choice to capture the spirit and strength of Wollstonecraft.”

Wollstonecraft, who died in 1797, is hailed as the foremother of feminism and women’s suffrage, and was also a prominent human rights campaigner, novelist and philosopher.

Commenting on Hambling’s design, MOTG chair Bee Rowlatt said: “This mould-breaking work of art will provoke debate, which is what public art should do, and which is what Wollstonecraft did her whole life!”

The campaign’s petition calling for authorities to give the statue the go-ahead has so far attracted over 4,000 signatures.

For more information about Mary on the Green, please visit maryonthegreen.org

← Hotpod Yoga – a yoga experience like no other, situated in the heart of London FieldsCouncillor set for £6,000 pay rise as Deputy Mayor after cabinet reshuffle →