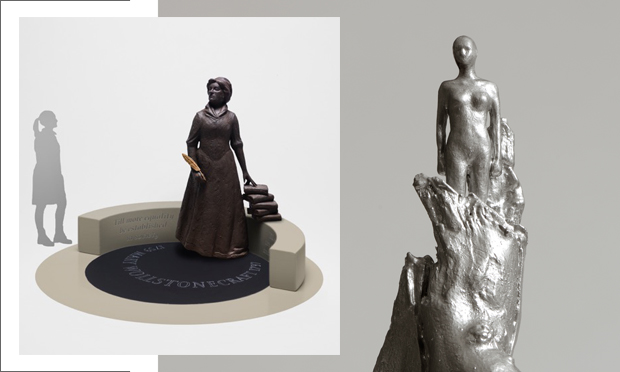 A long-running campaign to memorialise Mary Wollstonecraft on Newington Green has gathered pace in recent weeks.

Two designs for a proposed public artwork were shortlisted by the Mary on the Green (MOTG) campaign group, with celebrated artists Maggi Hambling and Martin Jennings making the cut.

A petition was also launched calling for the support of London Mayor Sadiq Khan, and this has gathered over 1,400 signatures at time of writing.

The campaign’s chair Bee Rowlatt told the Citizen: “We are trying to get recognition for this extraordinary woman who was actively annihilated from history.

“Mary Wollstonecraft was campaigning for women’s political representation 100 years before the suffragettes. She was also a leading human rights pioneer and the foremother of feminism. Her legacy is gigantic yet most people don’t even know who she is.”

MOTG has been working since 2011 to raise funds for a memorial to Wollstonecraft, who set up a girls’ school at Newington Green in 1784 while staying in a house on the Narrow Way (both sites are now commemorated with English Heritage Blue Plaques.) Her work, A Vindication of the Rights of Woman (1792) is considered a foundational text in the history of women’s equality.

A total fundraising goal of £200k has been set, which will pay for the artwork as well as an ongoing educational trust inspired by Wollstonecraft.

Ms Rowlatt highlighted that many contributions have so far come from small donations by local people, saying: “I’m very proud that we are so well represented by people in the local community – that means a lot to us.

“Newington Green was a formative community for Wollstonecraft and living in that place was the making of her, so it’s important to recognise her there.”

While living in Newington Green, Wollstonecraft was influenced by a community of radical Dissenters, who had close ties to the area’s Unitarian church – which still exists today as the non-religious (and dog friendly) New Unity church.

New Unity’s minister Rev Andy Pakula gave the memorial campaign the full support of his church, saying: “Mary Wollstonecraft was an inspiring visionary figure. She not only spoke about women’s rights, she lived a life of freedom, to the condemnation of history.

“It is high time that she was properly honoured for the ground-breaking work she did.”

The shortlisted sculpture designs will next be opened to public consultation, before a winner is selected.

Speaking about her artwork’s nomination, Maggi Hambling said: “I’m really excited at the prospect of making real my sculpture, inspired by the trail-blazing Mary Wollstonecraft, which acts as a metaphor for the challenges we women continue to face as we confront the world.” 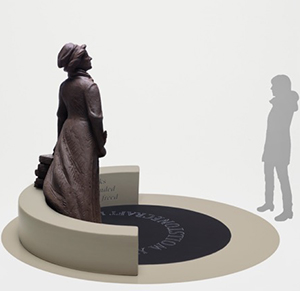 Martin Jennings said of his design: “I have proposed a statue of her that expresses her heroic courage and her sheer force of personality. Carved in stone on either side would be some of her words from the Vindication: ‘Till greater equality be established in society, till ranks are confounded and women freed’.

“Her figure would be cast in bronze and set in stone, to stand in place for at least as many centuries as her reputation has been neglected.”

“There are very few public memorials to women and our campaign helps to redress the balance and celebrate Mary Wollstonecraft’s legacy today.”

The recent developments coincide with an open letter signed by over 40 high profile men, including Labour leader Jeremy Corbyn, hailing Mary Wollstonecraft’s “ideas on justice and education [that] have become core values”, and calling for public support for the campaign to “break the ‘bronze ceiling’ and celebrate [her] extraordinary life and legacy”.

To find out more about Mary on the Green or to lend your support, see the group’s website here.