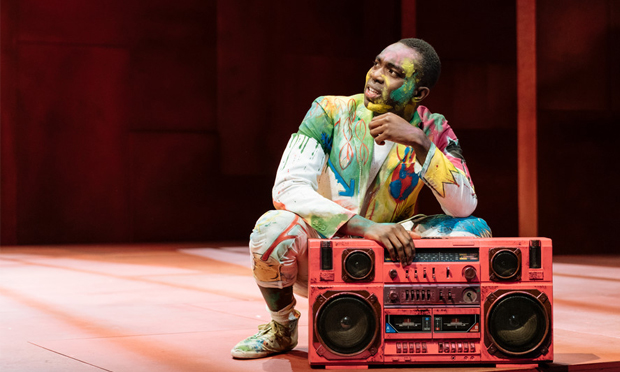 Simon Godwin brings Elsinore to Hackney by way of West Africa, in the final run of the Royal Shakespeare Company’s Hamlet UK tour. In a re-energised and vibrant production of the tragedy, Paapa Essiedu stars as Shakespeare’s eponymous, hitherto Danish prince – the first black actor to have taken up the role in an RSC production of the play.

Essiedu’s Hamlet returns from a western university to negotiate his place in his native kingdom channelling a generation of post-colonial leaders, such as Ghana’s Kwame Nkrumah, who returned to their respective motherlands after years in the West with a feeling of double consciousness.

The impressive set and costume design of bold pattern prints, and the captivating music composed and performed by Sola Akingbola (from Jamiroquai) situates the production in West Africa. 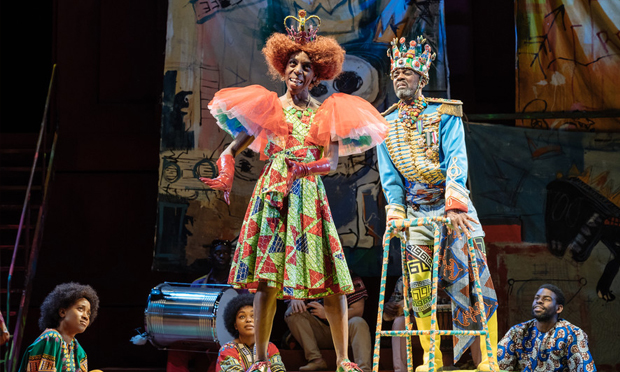 Ewart James Walters as the Ghost of Hamlet’s father, with staff and dressed in kente cloth, is a powerful ancestral veneration, that is in some ways quite removed from Hamlet, making his difficulty to take action all the more relevant. Before encountering the Ghost, Hamlet tells Horatio (James Cooney) of the music: “though I am native here, and to the manner born, it is a custom more honour’d in the breach than the observance”, he wobbles, jokingly mocking the custom to his companion and further compounding his outsider status.

Essiedu brings the energy of youth to Hamlet. His surly, yet quick witted take-downs of Claudius, powerfully played by Clarence Smith, as well as his cheeky Basquiat style tagging of the palace, make this an engaging and likeable take on the prince.

He bounces around the stage, like an atom bomb, in a way that is both tantalising and, when he attacks Ophelia (Mimi Ndiweni), terrifying. The youthful energy makes the painful procrastination of Hamlet all the more profound, and Ndiweni’s portrayal of Ophelia’s suffering the more tragic.

Another stand out performance comes from Buon Tihngang as Laertes. Dressed head-to-toe in Ralph Lauren, within this production he comes across as a real contender for the throne. 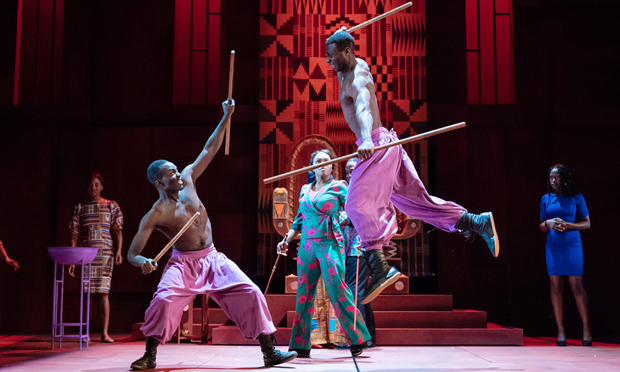 When the stage shakes with the percussion of the drums and ensemble bellows, as King Claudius is told the crowds ‘“want Laertes to be king! It’s as if they were starting the world from scratch right now, throwing out the traditions and ancient customs that are the support of every word we utter”, there is a real glimpse of fragility in Claudius’ control of him, making Laertes a far less malleable stooge than Hamlet’s peers.

The thrilling fight sequence between Laertes and Hamlet takes on the form of a chest-baring ceremonial battle, in which it would be conceivable for Laertes victory to be seen as potentially bringing him closer to the throne, as well as avenging his father and sister. It’s an intoxicating production that brings out rich new themes within Hamlet, and the potential of emerging new talent.

Hamlet runs at the Hackney Empire, Monday to Saturday, from tonight, with matinees on Wednesdays and Saturdays. For more details and to book, visit this page on the Empire’s website