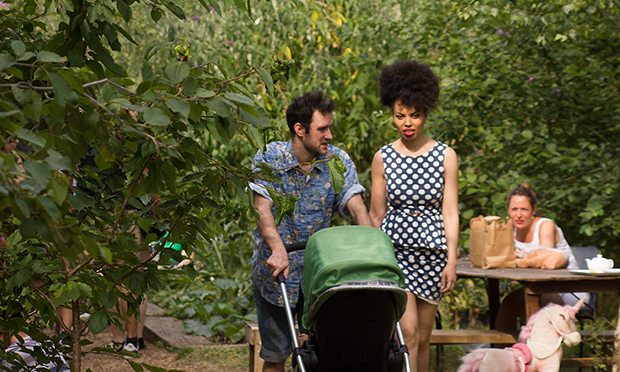 Under threat: a young couple stroll through the Eastern Curve Garden.

Hackney residents have accused the council of being “deliberately unclear” and “misleading” in a withering response to the consultation for the Dalston Area Action Plan (DAAP).

Earlier this year, the Town Hall invited locals to have their say on the “draft principles” of the regeneration project, which it calls the “Dalston Quarter”.

Last week, it published a report on the consultation, in which it accepted there was “distrust” over its motives.

Responding to the “volume and nature of concerns”, the council said in the report that it was “keen to review” its plans and develop “further future options” before consulting the public again “next year”.

The three draft principles for the DAAP include a “recognition of past and present to shape the future”, a pledge to “re-enforce a public realm befitting the Dalston Quarter”, and a commitment to providing a “diverse range of uses which work together to foster networking, collaboration and the creation of cutting edge products and services”.

Over 2,000 people responded anonymously to the council’s call for input, with one writing: “Most of these ‘principles’ are anodyne and meaningless and can be interpreted according to what developers want to do.”

Many spoke of their fears over the future of the Dalston Eastern Curve Garden (DECG), as well as other popular local haunts such as the Arcola Theatre and Café Oto.

On the garden, which could be replaced by a thoroughfare to the Kingsland shopping centre, one respondent wrote: “DECG is an innovative model of use of public land that Hackney Council should build from, not build on.”

The garden is currently run by community volunteers following a temporary agreement with a private landowner. 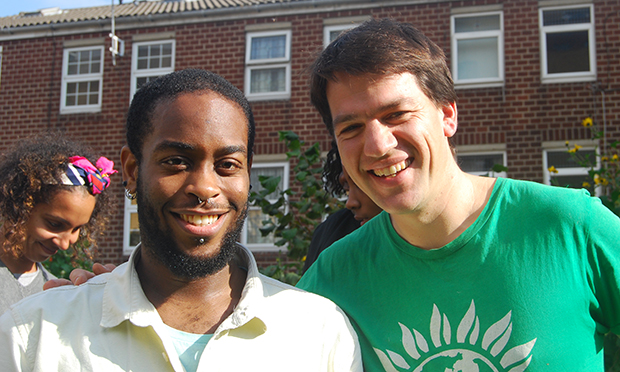 Support: local campaigners Alex Armitage (right) and Dan Thompson are among those fighting to save the Curve Garden. Photograph: Hackney Green Party

Local Green Party campaigner Alex Armitage said: “We must learn from the failures of the Dalston Square development with its single occupancy bus station and lengthening list of restaurants that have gone out of business.

“In contrast, the Curve Garden is a community-led social enterprise managed by local residents that has gone from strength to strength, now attracting over 150,000 visitors per year.

“This highly successful grassroots model of development is surely the way that we should bring Dalston into the future.”

In its report, the Town Hall accepted there was a “strong distrust in the motives of the council”, and that many residents believe the DAAP to be a “purely commercial exercise for the council to sell off the land for private development”.

The document states: “Many respondents felt that the document was deliberately written to be unclear, providing misleading information as a ‘Trojan Horse’ to allow for the introduction of commercial development to replace existing organisations.”

The council goes on to admit there is “significant community concern about the future wider development of Dalston”, adding: “However, of particular concern in the context of the Dalston Quarter was the future of the existing organisations with a particular focus on the future of the DECG, Arcola Theatre, Café Oto, Bootstrap and V22.

“It is therefore proposed that further work is undertaken engaging with local organisations and looking at options for existing organisations in advance of the next stage of consultation.”

The report also recognised residents’ “dissatisfaction” with the consultation brochure, including the “omission of important information”, and the “timing and number” of drop-in events, which respondents complained were “too restrictive”.

Its report concludes: “In view of the volume and nature of concerns raised, the council is keen to review and further develop future options for the Dalston Quarter to respond in a balanced and measured way to the issues raised above.

“Work on the Dalston Quarter will continue to progress with a view of going back out to consultation next year.”

A Town Hall spokesperson later confirmed that the council has no plans to sell any of the sites it owns in the Dalston Quarter.

Cllr Guy Nicholson, Cabinet Member for Planning Business and Investment, said: “It must be stressed the consultation did not propose any future definitive plans for what is often described as the Dalston cultural quarter.

“The consultation sought everyone’s initial views on some broad principles for the future of the cultural quarter and how these could be captured in local Planning policy to strengthen the long term role and presence of creative, cultural and community organisations that make up this part of Dalston town centre.

“Alongside a desire to see the creative and cultural economy thrive in the quarter many were also concerned about the future of the Dalston Eastern Curve Garden and passionately called for this special open space to be part of any future plans.

“It is important to reassure everyone that the Council has been working closely with local organisations based in and around the quarter and will continue to do so.

“Going forward the Council will continue working with the community and taking the responses to the Principles document into the next design phase, will provide a shape and form for any new development in this important part of Dalston.

“The Council is committed to ensuring that the local community including local organisations, continue to be fully involved in a process that shapes the next stage of a plan for the Cultural quarters future.”

For more information on the Dalston Area Action Plan, or to read the consultation report in full, please visit www.hackney.gov.uk/dalston-aap

Update: this article was amended at 10:38 on Wednesday 29 November 2017 to include a comment from Cllr Guy Nicholson, and confirmation from the council that it does not intend to sell any of its Dalston Quarter sites.