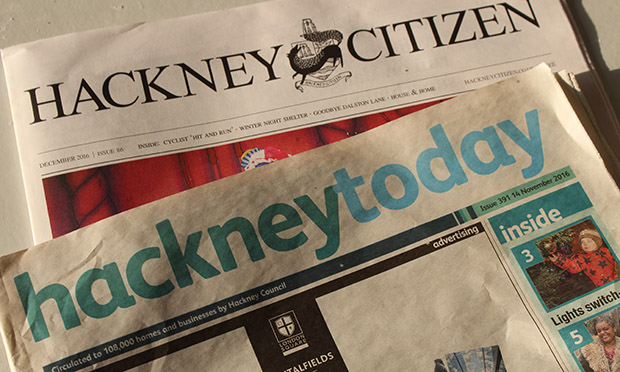 Hackney Today has been accused of competing with local papers

Hackney Council has confirmed the identity of the publishers of its taxpayer-funded weekly freesheet after initially being unable to “get to the bottom of that”.

Hackney Today‘s publisher is listed in official documents as “The Mayor and Burgesses of Hackney”.

But when the Citizen asked Hackney Council who the Burgesses are on 22 August, the council didn’t respond for over a week and then replied on 29 August that it did not know.

A spokesperson said: “We’re still trying to get to the bottom of that.”

After the Citizen published the mystery in its 6 September print edition and online on 8 September, a reader commented: “All London authorities’ official legal titles are ‘The Mayor and Burgesses of the London Borough of X’.

“This is due to London boroughs’ legal entity not being the council, but the inhabitants incorporated as a legal entity by royal charter, a process that was abolished elsewhere in England and Wales under the Local Government Act 1972.”

This information appears to have come from Wikipedia. Meanwhile, Bill Parry-Davies of Dowse & Co. Solicitors told the Citizen: “Mayor and Burgesses of Hackney are the legal name for the council, which is now a statutory corporation.

“They are the legal party in litigation, legal documents e.g. leases, contracts etc.”

Hackney Council confirmed this was the “correct” definition of the Burgesses on 14 September, after the Citizen sent the council’s press office this information.

A spokesperson said: “The definition of ‘Burgesses’ you shared is correct.”

Hackney Today, which costs more than £400,000 each year to produce, is currently defying a government order to be cut back to quarterly publication.

Hackney Council has been accused by the Citizen and rival paper Hackney Gazette of competing unfairly with local papers for commercial advertising. The council defends Hackney Today as a cheap way to give information to Hackney residents.

The Citizen recently revealed how Hackney Today might not fit the legal definition of a newspaper, and does not appear “fortnightly” as claimed, potentially misleading the public and advertisers.

Hackney Council responded that based on internal legal advice it “takes the view that there has been no breach of the law”.