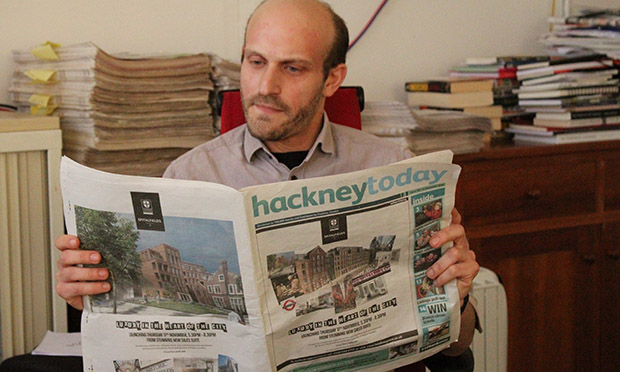 When he was Hackney’s mayor, Jules Pipe claimed an extra £400,000 per year would make virtually no difference to the council’s finances.

Fast forward a few years and the council is trying to offset the costs of its fortnightly freesheet by competing with local newspapers for advertising revenue. It apparently now pulls in what it claims is a crucial £150,000 a year from businesses like estate agents and property developers.

But, although the real costs of producing Hackney Today are contested, the amount of ad revenue is not sufficient to cover production and distribution costs.

Meanwhile, newspapers like the Hackney Citizen are severely challenged by a financial climate that is being worsened by the council’s decision to compete commercially with platforms for real journalism.

Council-produced pseudo-newspapers have been scrapped or drastically cut back in other boroughs. Hackney Council is an outlier in this regard. It persists in printing some 100,000 copies of its freesheet every fortnight in defiance of the government’s publicity code for local authorities.

The Department for Communities and Local Government has previously issued a warning to the council. It is now understood to be considering what further action to take (stand by for more on this), and the matter is to be raised with Sadiq Khan.

The Mayor of London has previously said the local press is “vital” to a healthy democracy. Members of the Green Party group on the London Assembly yesterday pledged to raise questions with him about council freesheets and the impact on the local press.

In 2015, the council rejected a two per cent increase in council tax, which the Town Hall said could have raised an extra £400,000 a year.

Hackney’s then mayor Jules Pipe declared at the time: “That is a quarter of one per cent of what the government has cut – it would make almost no difference.”

Politicians from all parties have previously claimed it is a luxury to publish council “newspapers” in such straitened times. But it is confusing that while Pipe claimed in 2015 that £400,000 would make no difference, the council now seems to be saying £150,000 makes all the difference.

But as with all printed publications, decisions must necessarily be made about what goes in and what is left out.

The council says such editorial decisions are made on the basis of common sense and “available local knowledge”.

When the council controversially introduced a Public Space Protection Order, or PSPO, which critics argued “criminalised” rough sleeping, this information was hidden away in a small notice at the back of Hackney Today and no press release was sent out about it. But the title finds space for taxpayer-funded Sudoku and, on occasion, even restaurant reviews.

Hackney Today eulogised Passing Clouds founder Eleanor Wilson in its Hackney People features slot reserved for individuals who are “making a contribution”. It did not mention she had been banned as a company director for failing to pay tax.

The council admitted to the Hackney Citizen that there was “a small element of risk” in its approach to deciding whom to feature on the Hackney People page, and a spokesperson said it “would not be possible, or indeed desirable, to conduct costly CRB checks, or immigration and tax investigations on individual residents for the purposes of an interview in the council newspaper.”

As the Hackney Citizen pointed out in its ‘Titbits’ column at the time: “Who mentioned doing a CRB check? How about simply asking Ms Wilson some tough questions? Or would that be too much like journalism?”

More recently, Hackney Today profiled wheelchair basketball player Ade Orogbemi and ran a timeline of his life which omitted to mention his six month jail sentence in 2009 for disability benefit fraud – despite the fact that articles about this currently appear high up on a Google search.

Asked about why this period in Orogbemi’s life was not mentioned in the timeline, the council said that, as his conviction was spent, reporting on it in this context would have breached the Rehabilitation of Offenders Act.

We bear no malice towards Orogbemi and recognise that he long ago served his sentence, which should not be held against him.

We merely refer to it as we would have expected the council to have at least asked him about it, having decided to feature him. To do otherwise seems disingenuous, since the council appears to be trying to produce journalism.

Some might say that if you’re going to do journalism, do it properly or not at all.

A newspaper or not?

Who is in charge of Hackney Today? In theory, its editor Jane Young has the absolute prerogative to decide which articles are featured and how they are written and presented. But the council has admitted to the Hackney Citizen that content is approved pre-publication by head of communications Polly Cziok, who in turn is answerable to the mayor.

Is it a newspaper? Yes and no. In 2011 Jules Pipe said it was “a newspaper in style”. However, he also stated: “It’s not meant to be reflective of life in Hackney. That’s the job of a newspaper.”

The Hackney Today media pack, its pitch to advertisers, clearly describes the publication as the “Hackney Today newspaper”.

Why does any of this matter? If the council is facing such tough times, why shouldn’t it commercialise its operations?

One should first ask whether publishing Hackney Today is as strictly necessary as the council suggests and whether some other arrangement might be found that can genuinely allow both it and the independent local press to flourish.

If this is not possible, why not take things to their ultimate conclusion and compete aggressively for advertising revenue so local news publications disappear entirely? This would presumably have the added benefit of allowing the council to employ fewer staff in its communications department, thereby saving yet more money, since there would no longer be any journalists around to ask difficult questions of the mayor and others.

But there are matters of principle to consider, and there are ways of doing things differently so as to preserve the hallmarks of a democracy.

We do not believe that Hackney Council wants to kill off the local press. I take Mayor Philip Glanville at his word when he said on Twitter that he does not believe Hackney Today seeks to compete commercially with us. But whether it seeks to do so or not, and what the mayor believes, is irrelevant – this is the effect.

And don’t just take our word for it. Lest you think newspapers never mention their rivals, here’s a quote sent through to me today by Hackney Gazette editor Ramzy Alwakeel.

He said: “I hope Hackney Council agrees with me that the existence of a free press is an indispensable asset to public life in Hackney. I believe the best way for the town hall to communicate with the people who live here is by working with papers like the Gazette and the Citizen, not competing with them.”

Local newspapers of the borough, unite!