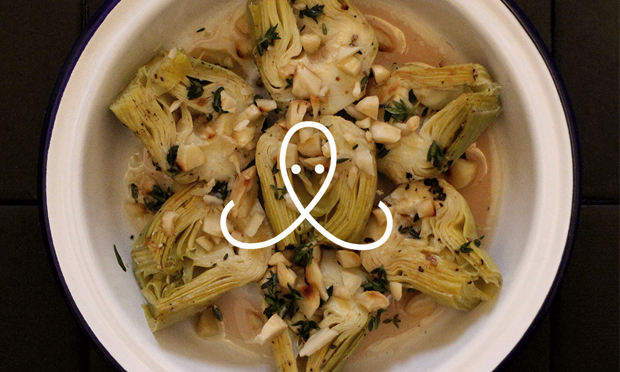 119 Lower Clapton is a nice, minimalist café, all chipboard and warehouse chic – suited to those enviable souls who’ve finagled a job where one can do it all in a coffee shop on one of those Apple computers they have now. But if word spreads of Squid Kitchen’s current residency, there may be a few Madrileños and tapas enthusiasts coming in on Thursday, Friday and Saturday evenings too, as SK’s Sarah Rippon serves a lovely bit of Spanish-inspired squid, as well as other street food that goes beyond the sea.

Over olives, my friends and I studied the menu, a selection of small plates and treats which tick off pretty much all of the subgenres of tapas. The prices aren’t quite as low as exalted joints like Miss Tapas in Peckham, but all plates can be had for between £4 and £8. When our server Jade (a friend pitching in to help Sarah post-day job, and doing so in a much friendlier way than I’d manage under those circumstances) took our order, almost every item was blurted out, as I believe is the custom. The first to arrive was the chorizo, slow cooked and served with paprika, piquillo peppers and sherry vinegar chickpeas. 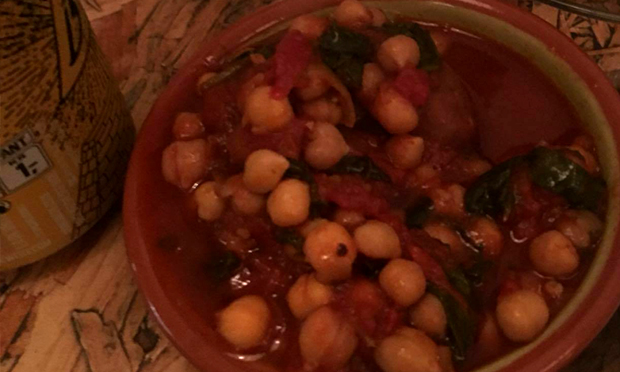 I’ll admit a slight antipathy to chickpeas, as well as anything that has texture a bit too beany, but the way they provide an accent to the soft chorizo, which has a comforting lack of give, is delectable. I even lifted my bean ban to try a bit of my dining companion’s Poached Egg, Manchego & White Bean stew, which was also delicious (although I’m still not going near kidney beans.)

I’m not going to chronologically run through the rest of our order, as the way each dish played off the other was one of the things I enjoyed most about the evening. (Also, as the beers on offer included my previously-stated favourite, Beavertown’s Neck Oil, the order the dishes came out isn’t 100% clear to me at this point.) For example, the Grilled Artichokes might not be something you order alone, but the almost balsamic sourness of the dressing cut through the more wholesome, rich flavours of the Lemon, Paprika and Garlic Chicken. The latter was a real standout – as moreish and succulent as chicken gets.

Patatas bravas are of course of totemic importance in tapas, or at least in the ‘chips with everything’ UK where I’ve had the majority of my tapas. Squid Kitchen’s were crisp, paprika-enhanced and came with a beyond-smooth aioli that brought about the euphoria of finding a kebab shop at 2am that stocks delicious garlic mayonnaise. Given the name of the venture though, perhaps the moment of most importance was when the eponymous squid pitched up, piled pleasantly high atop an eclectic salad. 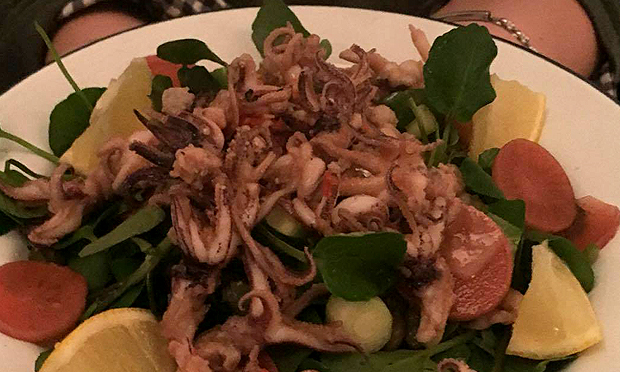 Said capers, which have the capacity to overpower almost anything, are beautiful in the mix and only add to the Mediterranean zest of what is a supple, fresh bowlful of baby squid. The more searing flavours of the chilli and lemon are balanced by the neutralising effect of the spring onions – the tender squid and salad in perfect harmony. This would be a capper to any cena con amigos, but Squid Kitchen has two hidden weapons that should compel even the fullest of fiesteros to keep going for one more course – dessert. The first combines vanilla cream with a sweet almond tart and is a damn sight more joyful than my daily almond croissant eaten on the Overground platform. The other is a simple combination of a rotating selection of cheeses with amazing fig jam, that we were all content to lap at in a tapas daze until we decamped to Biddle Bros and said ¡Salud! to an evening well spent on complex, mature tapas with lots of simple, elegant flavour.