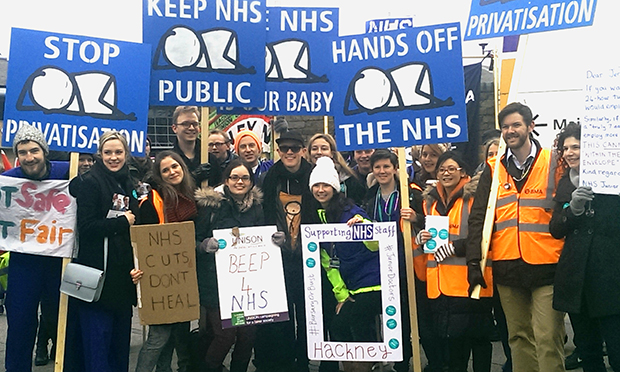 Placards with Stik’s iconic artwork were held aloft as doctors handed out leaflets in the freezing cold as part of a national strike against changes to doctors’ contracts.

“This is my local hospital,” Stik told the Citizen. “I’ve been here recently. I had a bit of a health scare, but the doctors made sure I was okay. It’s a great place.

“They’re our doctors and we need to pay them properly.” 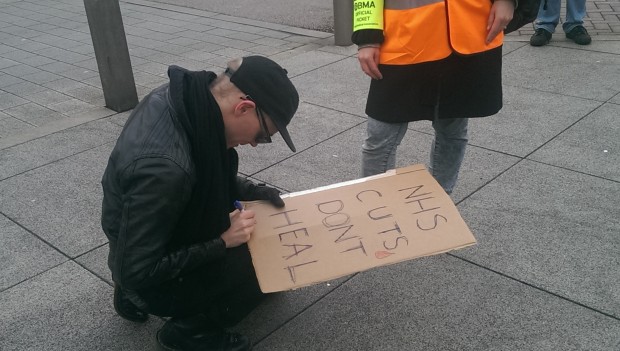 Around 30 junior doctors gave out leaflets and stickers outside the hospital as passing cars and buses honked their horns in support of the strike.

Today’s industrial action was called by the British Medial Association after negotiations with health secretary Jeremy Hunt over a new contract for junior doctors failed to bear fruit.

Stik’s personal connections with Homerton Hospital go back a long way. Last year he painted a mural opposite the first floor cafe for free and donated £50,000 raised from prints of the artwork to Homerton’s art therapy room.

“I did it to generally support the hospital,” he said today. “The design is a sleeping baby. 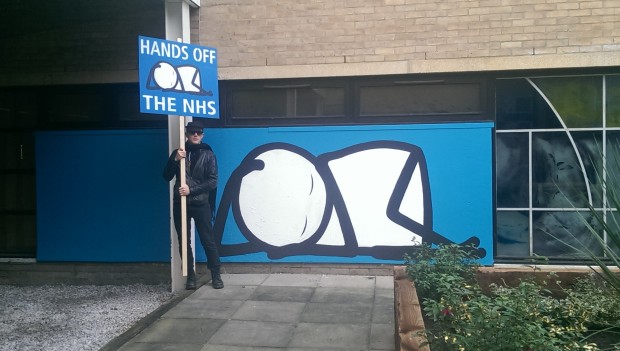 Doctors marched from Homerton to Hackney Town Hall on Mare Street, before handing out leaftlets and stickers outside Hackney Central Station.

Sam Moody, a first year doctor at Homerton Hospital, said: “The strike is the end of a difficult road in which neither side has reached an agreement, and while I feel it’s unfortunate that a strike has had to happen, we’ve got to a point where we felt there wasn’t another way to be heard.”

He said the new contract, which sees doctors work evenings and weekends without overtime pay, will affect doctors with families the most, and lacks safeguards against doctors working even longer hours. 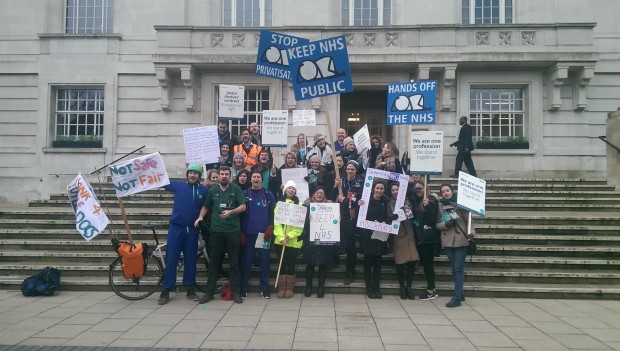 Shona Jacobsberg, a medical registrar at Homerton, said: “You don’t become a doctor if you don’t want to work nights and weekends. It’s just that you should receive fair pay for doing the job.”

She said doctors with children would have to pay extra for private childcare after hours and on weekends.

“If you have doctors who pay for childcare, and you have to pay enhanced rates for [private] childcare, that’s what I define as unsociable working hours,” she said.

Dr Jacobsberg also warned of the strain the government’s seven-day service would put in Accident and Emergency staff.

“This contract is going to affect A&E more than anyone else,” she said. “If you’re not going to be paid more for working on a Saturday night, that’s less incentive for people to work.

“And if you make A&E an unattractive prospect it wrecks the whole operation.”

Health Secretary Jeremy Hunt has condemned the strike, saying: “Our absolute priority is patient safety and making sure that the NHS delivers high-quality care seven days a week – and we know that’s what doctors want too, so it’s extremely disappointing that the BMA has chosen to take industrial action which helps no-one.”