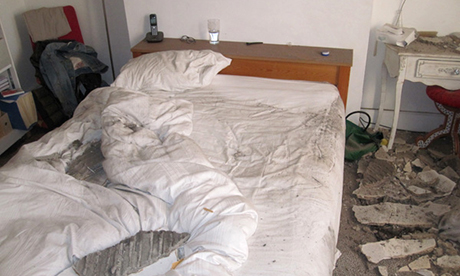 Deep concern: father outraged that council granted planning permission for basements on each side of his property. Photograph: Tim Smith

A father is calling on Hackney Council to ban basement excavations after a ceiling collapsed over the spot where his two-year-old son had been playing just hours before.

Cracks in the bedroom ceiling grew larger after works began on a basement next door to his home at 88a Wilberforce Road, Tim Smith claims.

“This is a direct consequence of the planning consent granted by Hackney Council for this type of dangerous and disruptive excavation work.”

“My young son George had been playing directly beneath the collapse hours earlier and could have been seriously injured if not killed.”

Mr Smith, 56, told the Hackney Citizen the ceiling caved in while his partner, Julia Muthusamy, 41, was sleeping just metres away.

“A piece of plaster fell on her hip and bruised it. But it could have seriously injured her or killed our son if they had been directly underneath.” 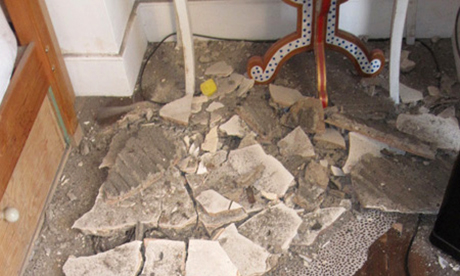 Mr Smith, who is a builder himself, does not hold the developers responsible for the incident. “I don’t have a problem with the builders or developers. They are doing their job and they’re doing it well,” he said.

Instead he points the finger of blame at Hackney Council for approving the excavation in the first place.

“It’s a total nightmare. We are facing continuing stress and shock due to the upheaval and repairs. This is something that the council’s planning department has to take on board.”

Last year Mr Smith joined forces with neighbours to protest against the basement excavations along the street. The group was protesting over the noise and disruption caused by what they said was “excessive overdevelopment”.

But the council approved the plans to dig down at number 86 Wilberforce Road despite concerns by residents.

One year on, Mr Smith is now calling on the council to ban basement extensions entirely.

“We want to see a total ban on this type of excavation across the whole borough – and to avoid another accident that may prove to be fatal.”

A spokesperson for Bostall Architectural Services which is carrying out the works said: “We are experienced developers and have carried out excavations of this kind for many years.

“Prior to the works, neighbours were consulted and party wall agreements were drawn up to deal with such issues.”

Bostall says it followed due diligence procedure, employing an independent surveyor to assess the condition of the party wall – a partition between two adjoining buildings – before the works began.

“In this particular case, the ceiling of the neighbouring property was previously blown as the owner has noted. All works to the party wall are complete, and have been for many weeks.”

Hackney Council has not responded to a request for comment.