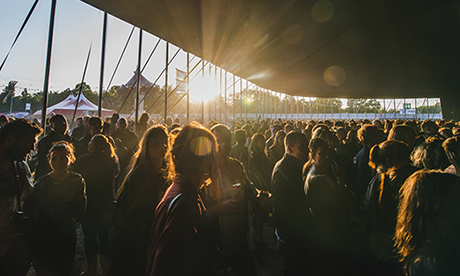 PJ Harvey is to perform an exclusive headline slot at Field Day 2016, as the first wave of acts for the East London festival were today announced.

The ground breaking artist, who has won the Mercury Prize twice and received an MBE in 2013, will be headlining Sunday night at Field Day, in what will be her first UK live, full band show since 2011.

The weekend festival will be returning to Victoria Park next June for its tenth edition, with an impeccably curated line-up of new talent, old favourites and internationally renowned acts to celebrate the milestone anniversary.

This year PJ Harvey released a volume of poetry and recorded her ninth studio album in front of live audiences inside an installation at Somerset House. So whatever she has in store for Field Day, it’s almost bound to be special.

Baltimore duo Beach House, fresh from releasing their alluring xx album Depression Cherry, will be joining the bill for the Sunday night, with Ben Watt, of Everything But the Girl fame, performing with his band featuring none other than Suede legend Bernard Butler.

Festival favourite Four Tet will be leading the decade celebrations on the Field Day Saturday main stage, while grime superstar Skepta will also be in attendance, hopefully with a brand new album to show off.

The enigmatic Deerhunter, with their shape-shifting approach to genre and sound, will also be gracing Victoria Park, as well as Floating Points, whose full band live show promises to be full of warm electro and delicate euphoria.

With the full line-up to be revealed in the months ahead, it already looks as though Field Day 2016 is going to be one almighty celebration.

Field Day is at Victoria Park on Saturday 11 and Sunday 12 June 2016
Ticketlink: http://fielddayfestivals.com/tickets/