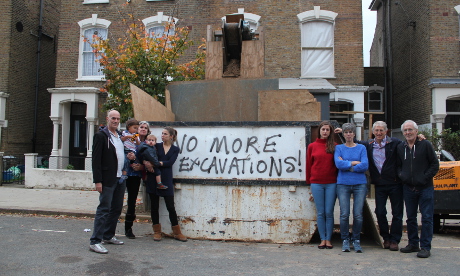 Digging for profit?: Residents of Wilberforce Road outside an excavation at number 90. Photograph: Ella Jessel

A string of “extreme” basement excavations are causing havoc by uprooting tenants and gutting heritage houses, say residents of a quiet tree-lined street in Brownswood ward.

More common in London’s affluent West End, where flurries of “iceberg homes” have been built beneath the streets’ surfaces, over the past few years, excavations have now begun to hit Hackney.

On this street alone three basements have already been completed, two are ongoing and one more is in the pipeline.

The slogan “no more excavations” has been graffitied onto hoardings, low-lying walls and skips as anger at the noise and disruption caused by “excessive overdevelopment” reaches tipping point.

One message reads “10 more years”, a reference to the duration of these projects, which can take anything from two to eight years to complete.

Builder Tim Smith, 55, lives in a flat at number 88a with his partner Julia and 22-month old son. The family is “sandwiched” between two excavations and face up to six years of consecutive building work if a planning application at number 86 gets the go-ahead.

From Mr Smith’s back garden the scale of the development at number 90 becomes apparent.

The entire back section of the house has been hacked off. Bathroom doors with dressing-gown hooks still intact flap from their hinges, and plug sockets and water pipes are exposed.

Beneath the cross-sectioned house is a cavernous pit which extends to the extreme edge of Mr Smith’s garden fence. 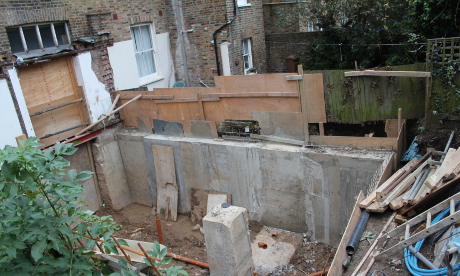 Speaking to the Hackney Citizen, Mr Smith said: “It is an extreme overdevelopment of the site.

“Up until now it has taken two years and we anticipate another 18 months to two years of work on the house. There is no control over it. These houses are part of Hackney’s heritage and they are lost for ever.”

Mr Smith said his son’s bedroom has been infested with rats from where the excavators have dug beneath the sewer line, and the hoardings outside the front are sheltering prostitutes and drug users at night.

John Burrows and his wife June have lived at number 82 Wilberforce Road since 1979.

Next door, at number 86, a planning application is in to convert the period house into four flats by excavating the cellar and extending a basement flat into over half the existing garden.

Mr Burrows said: “We face the prospect of yet another lengthy excavation close by us, and yet the structural impact it will have on our home as well as the noise and skip movements that will follow all seem to be irrelevant to the planning decision.”

The developers responsible for submitting the application at 86 Wilberforce Road, Bostall Architectural Services, said that while the “timing was unfortunate”, seven basement excavations in one road only amounted to 5 per cent of the street’s properties.

A spokesperson said: “I am aware that there will be around 7 houses on the street with basements, once the planning approved schemes have been developed, which amounts to less than 5 per cent of the households on the street.

“It is probably a little unfortunate as the timing for these developments is concurrent which is probably creating frustration for the residents.” 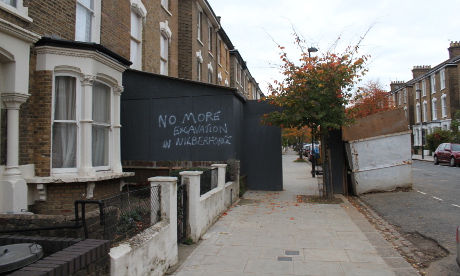 No more: Graffiti on the hoardings outside number 90. Photograph: Ella Jessel

Hackney Council says it has “limited powers” when it comes to exerting control over basement excavations.

While digging in conservation areas requires planning permission, in non-listed streets there are few material planning grounds to object on, and the schemes usually get the green light.

Many local authorities often look kindlier on large-scale renovations if they meet the demand for additional housing – one of Hackney Council’s top priorities.

But residents who have lived on Wilberforce Road for decades argue that the subterranean developers are digging for profit rather than providing solutions to the housing crisis.

Mr Burrows points out that the development planned at number 86 will offer less affordable housing than before. He said: “Of course there is an urgent need for more housing, but the house next door to us has been in multi-occupancy for some twenty years, providing affordable rented accommodation.

“All the tenants were evicted to make way for the sale to the developer. One man had been living there 19 years. It’s highly unlikely that when they developed it into four flats it will have as many people living there as it had previously. And of course it won’t be affordable rented accommodation.”

His neighbour Tim Smith agrees, arguing that most of the properties being developed on Wilberforce Road are “speculative” meaning they are being bought on behalf of clients seeking to make a profit through “group investments”.

However Bostall Architectural Services argued that the need for housing in Hackney is not “limited to just affordable”.

A spokesperson said: “The need for housing is not limited to just affordable, there is also a need to provide market housing.

“These period properties do not necessarily meet the requirements of modern housing and so converting them into a mix of properties that will better suit the social demographic of the area, is a considered approach adopted by the council.”