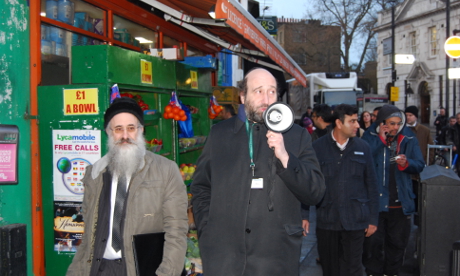 Traders took to the Narrow Way last night to protest against Hackney Council’s plan to keep the street closed to buses permanently.

Around 20 shopkeepers and residents came out in a protest organised by the Conservatives.

The Council argue that the move makes for a more welcoming shopping environment, as part of broader plans to regenerate Hackney Central.

Some traders argue that the diversion of buses from the top end of Mare Street means fewer people are shopping in the street, however.

Campaigners say they have gathered the signatures of “thousands” of people opposed to the change, and have presented this to the Council.

Speaking at the protest, Pawan Chawla, who runs Designer Baby on the Narrow Way, said: “We want our buses back, because the buses bring us business.”

Mr Chawla said that footfall on the street had dropped by half since the trial came in, threatening the survival of shops such as his.

“Most of the traders have signed the petition, [saying] that their business has gone down, but yet the council keep repeating in everything they print that the traders are in favour, which is a complete lie,” he said.

“Obviously [the Council’s] plan is to drive us out, because the regeneration does not fit with us – they don’t want us in the regeneration. … We’ve had enough of this, so that’s why we’re here protesting today.”

Under the plans, buses have been re-routed from the Narrow Way, and now travel along Dalston Lane and Amhurst Road. The street is still open to bicycles.

The decision to make the pedestrianisation permanent was announced two weeks ago, following a trial that began last summer.

A survey carried out for the Council concluded that there had been no significant impact on trade, and only a limited impact on journey times.

In a statement announcing that the trial would become permanent, Councillor Feryal Demerci, Cabinet Member for Neighbourhoods, said: “The trial has demonstrated how pedestrianisation can improve the Narrow Way.

This is a major transformative scheme for Hackney Central to nurture a unique and vibrant town centre for years to come. We are committed to supporting local businesses through this transformation and engaging with all interested parties about the future of the town centre.”

Speaking at the full council meeting last night, Conservative councillor Simche Sternberger called on the Mayor to reverse the “undemocratic and undesired” decision.

Update: This article was amended at 10:45am Friday 28 March 2014. It initially referred to a petition signed by those opposed to the pedestrianisation having been delivered to the Council following the protest. Subsequently we have learnt that, while Cllr Simche Sternberger had intended to deliver a copy of this petition on Wednesday evening, it was not in fact delivered. Campaigners claim that it has been delivered once previously, however.