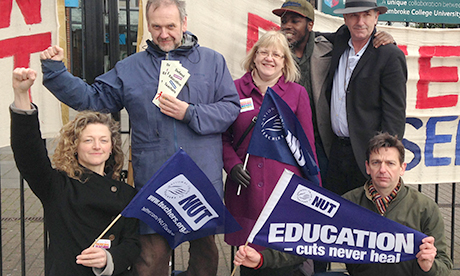 The majority of Hackney’s schools are closed today as the National Union of Teachers (NUT) take to the streets in protest about unsatisfactory pay structures, pensions and working hours.

The implementation of performance-related pay and an average 60-hour working week are among the points of contention in the ongoing row between teachers’ unions and the Education Secretary Michael Gove.

Forty-four of the borough’s schools will be closed today, with some schools remaining partially open.

Philippa De’Ath of the Hackney New School told the Citizen: “Our teachers care about education. The school is open and teachers are working.”

She added that staff at the school “have the freedom to discuss any concerns with us directly in the free school model and those that are on strike have chosen to do so on their own grounds.”

Hackney’s NUT representative Jamie Duff  said:  “This campaign is about defending teachers against Gove’s attacks on education, and the creeping privatisation of our education system.”

“The deregulation of the teaching profession starts with Gove’s academies and free schools,” Duff added, where “teachers are forced to work unsustainably long hours for less money. This policy is designed to make it easier for Michael Gove to drive down our pay.”

He declined to comment on whether any unionised staff at Hackney’s two free schools were taking part.

The national action, part of an ongoing row between the Department for Education and the NUT, has bred conflicting view from both parties.

A DfE spokesman said: “Parents will struggle to understand why the NUT is pressing ahead with strikes over the government’s measures to let heads pay good teachers more. They called for talks to avoid industrial action, we agreed to their request, and talks have been taking place weekly,”

But the NUT’s general secretary Christine Blower insists the government has ignored their concerns:“The talks are only allowed to discuss how Mr Gove’s policies are implemented. Michael Gove needs to change direction. If he does not, he will be presiding over a serious teacher shortage as thousands continue to leave the profession as a result of his policies.”

Demonstrations in London this morning will culminate in a rally at Central Hall Westminister this afternoon.

The NUT will not be joined by fellow teachers’ union NASUWT. The two unions joined forces in a strike action last year.