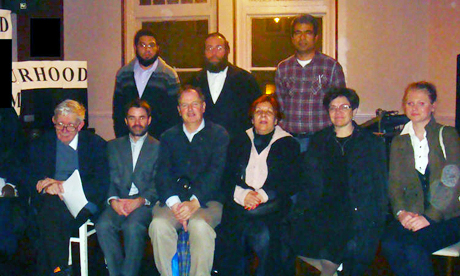 Council plans to allow residents in Stamford Hill to create a local body to influence planning policy have been slammed as a ‘front’ for councillors to manipulate ethnic and religious divisions to their own advantage.

The proposal to introduce a neighbourhood forum in the north of Hackney under the provisions of Localism Act was opposed in a scathing report by campaign group Hackney Planning Watch, which called on Hackney Council to refuse the application.

“We view this proposal as an attempt by local Conservative and Liberal Democrat politicians to manipulate existing ethnic and religious divisions for their own short-term advantage and to the disadvantage of the wider community,” said the Hackney Planning Watch report.

It went on: “The proposed body has no history or tradition as a community organisation, but is instead a ‘front’ for current or former councillors from minority parties.”

Hackney Planning Watch said the area the Stamford Hill neighbourhood forum would cover transcends Stamford Hill to include Stoke Newington, Clissold Park and Upper Clapton. It suggested that the forum is inconsistent with the purpose of the Localism Act 2011 and could breach the Council’s obligations under the Equality Act 2010.

It also said the proposed forum “reflects party political ambitions rather than an interest in the views of the local community.”

Hackney Council said in a statement this week that applications for neighbourhood forums are being considered for Stamford Hill and Chatsworth Road. It also detailed how residents can apply for Council approval to set up their own forums.

These new bodies will be able to create ‘neighbourhood plans’ and have greater influence over planning policy on matters such as building schools and loft extensions, both long time issues of contention in Stamford Hill.

Hackney Planning Watch said in their report that the orthodox Jewish community in Hackney is a minority of the population in Stamford Hill and is not a homogeneous group. It said there are divisions within it over planning issues, and requested that the Council work with Hackney Planning Watch and the orthodox Jewish community to create a ‘cross-community’ forum to address the planning needs of all residents.

The Stamford Hill neighbourhood forum has been in the works for several months and is chaired by Cllr Linda Kelly, who defected to the Conservatives from the Labour party in 2011.

Cllr Simche Steinberger, who represents the Conservative Party in the forum, said he is “gobsmacked” by the accusation that the forum is a front group for minority councillors.

Cllr Steinberger said: “This forum is for everyone no matter their colour or religion or age, and I encourage people to join.”

“I don’t know where politics comes in to this,” he said. “Because I’m a Conservative, I’m not allowed to be on the forum?”

Cllr Steinberger said the forum has been in existence for over a year and has been in dialogue with Hackney Council for much of that time. He said that individuals from the Polish, Muslim and African communities were involved, and encouraged Hackney Planning Watch to join the forum so the group will have more influence.

Cllr Steinberger also said the forum was “not to do with one particular thing” such as loft conversions, and would work on other issues including green spaces.

A six week consultation is currently under way on the plans and will end on 4 February.

For more on the consultation go to Hackney Council.