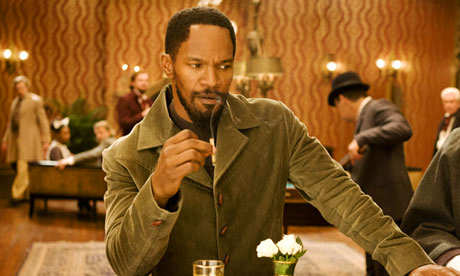 A new Quentin Tarantino movie is always preceded by a big build-up, but Django Unchained especially has got everyone talking due to both the subject matter of his latest effort and some of his brash interviews prior to the film’s UK release.

Tarantino has been talking big about the significance of his western as an unashamed statement about the shocking brutality and injustice of historical slavery. There have been films to tackle these issues before – Amistad being a notably example – and we have the biopic Lincoln to be imminently released, but it is a subject that is often treated with caution.

Django Unchained does not do so and all the better for it. Hollywood’s enfant terrible has been brave and bold, especially with the relentless use of the n-word in his script, but why indeed should he shy away from the bitter bigotry and racist language of the time.

Writing and directing a western had been on the cards for Tarantino for a long time and he has chosen to recall many of the elements of the classic Sergio Leone spaghetti westerns, as well as loosely basing it on cult 1966 western Django.

Action-wise this is most evident when a mystery gunslinger – the German travelling dentist Dr. King Schultz – rolls into a dusty town, instantly shaking things up. Musically there are some Ennio Morricone instrumentals, as well as atmospheric, storyline-based songs, including one with lyrics penned by Jamie Foxx.

Dr. King Schultz [Christoph Waltz] is a dentist-cum-bounty hunter who is after some wanted men, called the Brittle brothers, who he intends – as his latter job title suggests – to kill for cash.

The Brittle brothers work for a man known as “Big Daddy” [Don Johnson], a white-suit-wearing plantation owner with a host of slaves in his possession. To gain his bounty he audaciously seeks out a slave to assist him by travelling with him to the plantation to point out the brothers, so he can accurately execute them. The black slave he purchases and frees is Django [Jamie Foxx], who knows the Brittle brothers and is more than happy to help Schultz with his task.

Set in 1848, pre-American Civil War Deep South, this odd couple’s journey unsurprisingly ruffles a fair few feathers from the bigoted townsfolk, sheriffs and landowners, but the intriguing and quirky Schultz has many tricks up his sleeves and an eloquent, if bizarre, charm.

Seeing potential in the powerful, intense and revenge-fuelled Django – who also proves pretty handy with a six-shooter – Schultz and the unshackled freeman agree a deal: Django will become Schultz’s partner in the bounty hunter game and Schultz will help track down and rescue Django’s wife (still a slave) from the clutches of the extravagant and villainous Calvin Candie [Leonardo DiCaprio], owner of a notorious plantation named Candyland.

The deal is mutually agreeable and Django cheekily expresses his approval: “Kill white folks and they pay you for it? What’s not to like?” Schultz gets an extra pair of hands, plus he becomes more emotionally-charged over the course of the tale, in both his disapproval of slavery and his sympathy for Django’s plight, which includes the sentimental attachment he has to the former-slave’s own mission.

Django’s wife is called Broomhilda [Kerry Washington], which is the name given to her by former German owners, and a name that evokes parallels in Schultz’s mind of old epic legend, close to his heart, that inspires him to see Django’s rescue mission through.

They devise a cunning plan to infiltrate the fearsome Candie’s household, which includes entering into negotiations with Candie to purchase one of his Mandingo fighters – black slaves forced to fight to the death in a specialist wrestling style for rich people’s amusement and wagering – leading to tense, but entertaining interplay.

Considering the themes Tarantino dices with, it may seem strange to comment that this is arguably his funniest film to date. His screenplays are always laden with laughs, whether it is when dangerously juxtaposing intense violence with funny quips, or in elaborate monologues and digressions.

He often engages his characters in tit-for-tat vocal exchanges that mirror the pace and fury of the action and gunplay. Django Unchained though just keeps the laughs coming steadily and there is an ebb and flow of comedy and tension throughout.

When recently Krishnan Guru-Murthy asked him to justify the playful violence in his films, the great director blew a gasket and told Guru-Murthy: “I’m shutting your ass down”. Tarantino felt he didn’t need to go over old ground, reiterating that the interview was an advert for his film and that a debate about the dangerous influence of violence in film was for another time or for others to discuss.

This is a film dealing with profound themes, directed with his trademark touch of stylishly-portrayed violence, cool music and quotable speeches and his films are almost a genre in their own right, so distinctive is his tone. He argues that the film justifies itself.

Although this is another revenge movie from Tarantino, it is so much more than that. It has heart, edge, style, action, laugh-out-loud moments and effortlessly-slick dialogue and it deals with the subject of slavery without being over-sentimental or equally without being too blasé.

There is a comfortable balance, despite occasional bizarre sketch-like scenes, including a spoofy farce involving a hapless lynch mob complaining about the positioning and size of their KKK hood eye-holes.

The cast is fantastic: Waltz is in form as good as Inglorious Basterds; Foxx convincingly embodies the emotions of the freed slave; and Samuel L Jackson is in scene-stealing mood as the “Uncle Tom”-type character Stephen, Candie’s sycophantic manservant who continually oversteps his presumed boundaries.

The Coen brothers may be Hollywood’s kings of quirky and dark comedy action, but Django Unchained is funnier and hits harder. Tarantino is back at the top of his game and this is a genuine modern classic.

Django Unchained is showing at the Rio Cinema until 31st January and the Hackney Picturehouse until the mid-February.