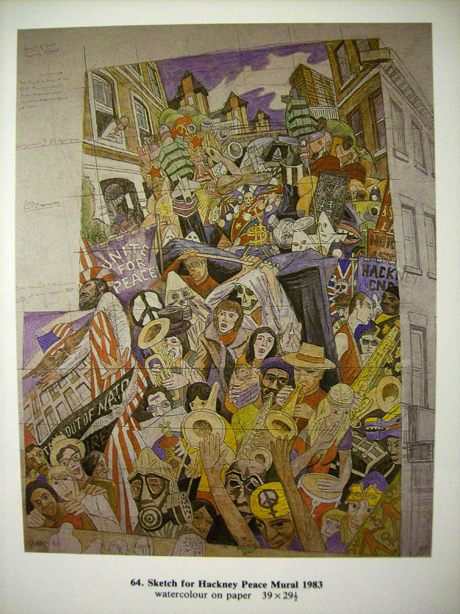 The death of the artist Mick Jones, son of the trade unionist Sir Jack Jones, brings to an end part of the continuing story of the Dalston Peace Mural in 1984.

Mick, a modest man and devoted to his father, was a talented artist and a lovely friend, and the finisher of the Dalston mural. It was designed by another Hackney resident, Ray Walker, who died in 1984 before being able to complete it.

The paint they used on other murals gives a strong ‘poster paint’ effect, but the way Ray painted led to overexposure to the fumes of the permanent silicate-based paint, which was specially created to last the life of the wall itself.

Ray lived in Beck Road with his wife Anna, also an artist, who helped to finish the Dalston work. The then Greater London (GLC) Arts Committee commissioned the work and it was opened by the Committee Chair Tony Banks, who continued to champion the mural years later.

It is not considered ‘art’ as such by the authorities and so ineligible for a Grade II or similar listing as with buildings of note. As far as the legislation is concerned, such murals are no more than ‘adverts’. Reassuringly, it is considered ‘of special local interest’ by Hackney Council’s Planning Department and the building it is painted on is identified for protection and refurbishment under the Dalston Area Action Plan.

Much of Ray Walker’s mural work has been destroyed – Tower Hamlets Council took down one mural on Chicksand estate which graphically portrayed much of the concerns of the Bangladeshi community of the time in the 197os and 1980s, and one commissioned to mark 600 years of the Peasants Revolt in 1981 was later quietly removed without any proper consultation in the creation of Mile End Park.

Unless we are vigilant, such works can be removed by public authorities who seem to have little understanding of all the different strands of culture and its varied expressions.

A small group of us have acted as custodians for the Peace Mural down the years – Mick was chair of the Friends of the Mural, and I acted as secretary. We have had many ups and downs in the struggle to preserve this masterpiece.

At one time, the building it is painted on was bought by a developer whose main thought was demolition but after a lengthy campaign, Hackney Council finally purchased it.

Another time, we provided information for the Spectator magazine after they said a certain Boris Johnson, then editor, had spotted it on a number of visits he made to Hackney on the No 38 bus. I did try to warn them their readers may object as it was about Hackney being declared a nuclear-free zone, Hackney Peace Carnival of 1983, and unilateral disarmament, and that Ray was most definitely a socialist, but they published a great article in the end.

We talked with Transport for London for three years to see if they would incorporate aspects of the Mural into the public design of the Dalston Junction station. For a long time they were interested – and took extensive photos of the mural – but when they neared the construction stage, they quietly dropped it, despite protest letters to the Transport Commissioner and to one, Boris Johnson, who also seemed to have lost interest.

But this kind of mural has vigour like the community around it. It is flowing in colour, in movement, fluid in movement, drawing you in and through it. And it’s about us, the people who live here, the people of that time. How we felt, how we think the world should be. It makes a defining statement about the area, about the radical nature of Dalston.

It is not just “pretty” but also has political things to say. Rather like the West Belfast anti-imperialist republican wall paintings which so struck Ray Walker on a visit: “The murals are a way of resisting British oppression – not with physical violence – traditionally the norm – but with another kind of weapon which is perhaps more insidious and powerful, that is the images and the word.”

He added: “I want to paint about working people, well people in general, what it’s like to live here and now, and try and develop a really solid British cultural image which is about British people as a racial mix.”

His mural (1978) on the wall of Bow Mission, Bow Road, is still there. “I personally am more involved in images which have got to relate to ordinary people, I use some abstract elements and I think all mural painters can do that because working on a monumental scale kind of demands simplicity and tonal constructs, and minimal conceptualisation of images.”

The style of the Dalston mural reflects the same style Ray used when he redesigned and painted the Cable Street Mural in 1983 in collaboration with Paul Butler and Desmond Rochfort .

In his last few years, Ray felt that the mural was increasingly the most effective vehicle for the expression of his ideas. Jose Clement Orozco, one of Mexico’s greatest mural painters in the 1930s and 1940s summed this up for Ray.

According to Orozco, the mural is “the highest, the most logical, the purest and strongest form of painting, for it cannot be made a matter of private gain, it cannot be hidden away for the benefit of a certain privileged few. It is for the people. It is for all.”

It is the idea, according to Desmond Rochfort that “art, once more, can be a dramatically powerful and radical form of democratic human social expression” and that for Ray “the mural represented the symbol of a truly democratic intervention in an increasingly undemocratic society”.

Time has moved on and some of the current issues have changed. We now have an explosion of street art. But that concept of free, public, politically based art which combines with the feelings and aspirations of the local community is still being worked out.

I hope Hackney people will continue to take care of this treasure. It has become a landmark which may help to preserve it. I am glad that Environmental group OPEN Dalston have joined forces with the London Mural Preservation Society to restore and protect it.

See the excellent article by Gareth Carey at http://easteight.com/?p=194 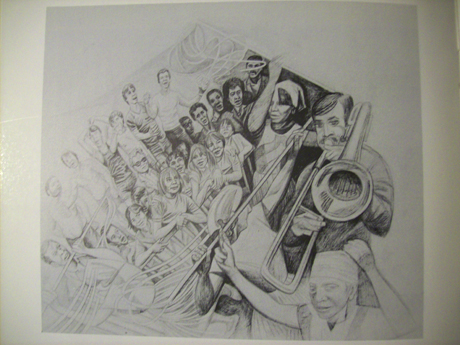 Sketch for the Dalston Peace Mural

The artist at work 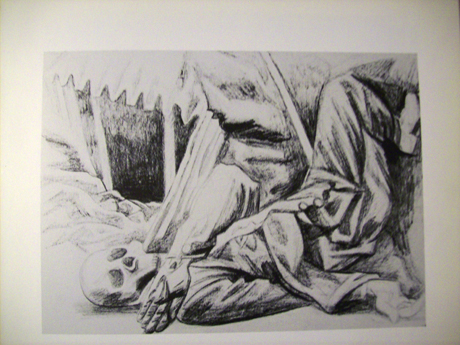 Sketches for the Dalston Peace Mural

← Django Unchained – reviewOne Life – achieving a healthier state of being →