Revved up for yet another extended bank holiday weekend, party goers descended upon Dalston in their droves to sample the assorted delights of Land of Kings.

Kingsland High Street was rife with festival feeling as people stepped out to celebrate the area’s burgeoning cultural heritage, undeterred even by Friday’s bout of drizzle.

As a steady throng of bodies moved up and down the strip, stopping off along the way for a casual spot of live Crab Racing, Karaoke or Cabaret, the Prince William Hill provided an array of off-kilter amusements.
Unannounced, wandering bands provided the soundtrack and a dark, candlelit warehouse set the scene, embodying that furtive essence of Land of Kings.

Elsewhere, MC Motors was awash with Cuban fervour, as people sipped Mojitos and jived to a medley of Beyonce and Gaga, courtesy of East London’s very own Brassroots.

Staple haunt The Alibi certainly lived up to its notorious reputation too, transformed into a musical hotbed of electronic party led beats, with Romy XX, Naomi and others doing it for the girls. 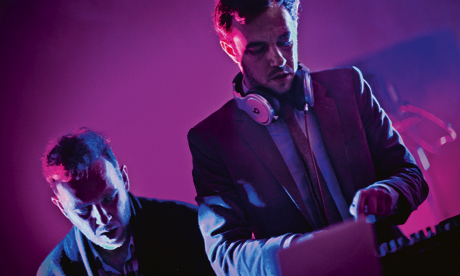 2 Many DJs at the Magnolia Banqueting Suite. Photograph: Tim Sullivan

For the discerning music fan, 2ManyDJs’ set at the Magnolia Banqueting Suite was the star attraction, an early 8.30pm slot precluding the usual rowdy scrum so often encountered at city festivals.

Any initial sound trouble went relatively unnoticed and a frenzied dance ensued, accompanied by some highly innovative choreographed sequences from a bevy of Dalstonites. For many, this grand hall was the place to be on the Friday night, providing the perfect appetiser to a long night of debauchery.

A secret party held by Absolut vodka saw Klaxons and New Young Pony Club take the DJ reins but current favourite Efes was the pièce de résistance. Drumming up a sweaty rave of heaving bodies, this modest snooker hall was taken over by Batty Bass DJs Hannah Holland et al. Clash Magazine and The Lonely Hertz Club’s ‘A History of Hackney’ brought the wobbly bass lines and a jungle face-off between East London legends Ragga Twins and Shut Up & Dance saw in an incredible finale.

Throw in the culinary delights of The Meatwagon and a few celebrity sightings (Anne Hathaway and Keira Knightly were rumoured), and you couldn’t have asked for a more fitting alternative celebration. Long live Dalston!

Dalston’s Land of Kings festival is a multi-venue music and arts event.This year’s event, which took place on Thursday 28 and Friday 29 April, partly coincided with the Royal Wedding.