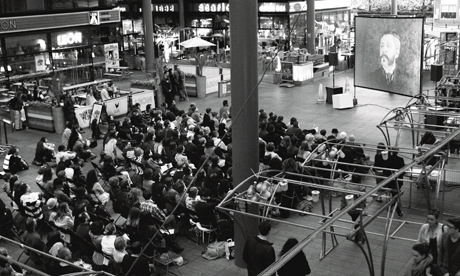 On 27 April the East End Film Festival celebrated its tenth year with an unrivalled cavalcade of mixed media film, music, classes and cultural events. Never traditionally confined to any particular place, this year’s filmic extravaganza came completely loose from its moorings and was more visibly dispersed around East London than ever before.

A lot can change in a year and the challenges to film making, exemplified by the disbanding of the UK Film Council, are numerous. The road ahead is uncertain but doomsayers should not be heeded as much can be learned from previous British work on display here, the calibre of which was particularly high.

The Barbican was the scene for the second-ever official screening of Ken Russell’s absurdly controversial 1971 cocktail of sex, violence and religion, The Devils: Director’s Cut; The Aubin Cinema screened Red Road, a taut and elusive take on Rear Window filmed around the mean streets of Glasgow; Living Like a Common Man, shown at the Genesis, is an important anthropological study of wealthy Guajarati Indians transported into the cramped confines of East London looking to realise the immigrant dream.

These are but three examples from a selection of over 70 UK productions crammed into five days. In any given day, it was not uncommon to dash past the same panting groups of filmheads charging across Whitechapel to the Genesis as you scrabbled up the Kingsland Road to the Rio.

Our European counterparts were given a raft of space this year including an inspired location-specific showing of Polish legend Jerzy Kawalerowicz’s Mother Joan of the Angels. Those not suitably frightened by the numerous horror flicks in the more conventional cinemas flocked to the gloomy and sinister environs of St John’s Church on Bethnal Green, which proved a brave choice to show this bone-chilling study of religious fanaticism and sexual repression. The emphasis this year was on Romanian cinema with many films given their first UK outing.

Tuesday, After Christmas is a bitterly ironic tale of a compromised man and the relentlessness and cryptic finale of Outbound left the audience both exhausted and impressed. Manasse – probably the oldest film shown at the festival – is also a Romanian classic and Spitalfields Market reverberated with the sounds of a live musical accompaniment by Minima. It was very encouraging for a country whose tiny film industry has boomed in the last decade.

The East End Film Festival showcases projects from around the world, which makes it all the more satisfying that the fruits of hard toil from Hackney neighbourhoods were also well prominently featured. The Rio Cinema premiered Under the Cranes which is based on a play written by Dalston poet Michael Rosen, first produced by BSix College at the Lower Clapton Round Chapel and now given cinematic immortality by Emma-Louise Williams. It is a poignant portrayal of Hackney and the layers of lives that make up the diverse patchwork of the area that doesn’t stray into the maudlin but rather stands up for an area, human and frail, that continues to be a crucible of change where the world wants to live.

Not to be overlooked between the EEFF and the Land of Kings musical gala, the pioneering Hackney Film Festival team curated a night of short films from Hackney residents at the Rio. Highlights included Kyoko Miyake’s Mrs Birks’ Sunday Roast, a heart-warming ode to British cuisine seen through the eyes of a Japanese mother; Tom Hunter’s A Palace for Us, an investigation of the Woodberry Down Estate near Manor House that uses contemporary interviews and enchanting re-enactments of life on the estate throughout history; also one of the Hackney Citizen’s favourite animators, Michael Please, had the treat of another screening of his BAFTA-winning, mind-bending short, The Eagleman Stag. The Citizen is now an official sponsor of the Hackney Film Festival which this September will be even bigger and bolder than before.

But this was not a weekend to be spent exclusively inside a dark room and fortunately the festivities provided so much more than just screenings. On Friday, to commemorate a wedding in Central London, the Water Poet on Folgate Street was host to a right royal East End shindig of the kind that evoked the ribald lawlessness of the area from 1700-1900. Mead was quaffed, minstrels warbled, ‘Jack the Clipper’ gave dicey haircuts, grainy footage of East End street parties of old were screened and even the Pearly King and Queen of Bow turned up.

Bank Holiday Monday saw the culmination of the festival and the Movie May Day – a treasure trove of free installations, workshops, shorts, concerts, poetry recitals and many more tucked away within the myriad shops, bars and cafes of Brick Lane.

The planned closing night ceremony at Boheme London was unfortunately cancelled due to issues with the venue but what took its place was by far a worthy alternative. Festival goers joined in the carnival atmosphere, taking part in mobile phone filmmaking, the Gorilla Film Magazine Treasure Hunt, a bicycle bell orchestra and some sultry, Communist curiosities courtesy of East End Cabaret.

A sun-soaked seven days delivered a plethora of stories from every inch of the globe, including these streets upon which we walk, enough to satiate the most jaded cinema goer and was a welcome distraction to the parades of kings and queens.

It must be mentioned that, aside from the films and sideshows, there was strong support for industry professionals. The Brickhouse on Brick Lane laid on three straight days of panel discussions, workshops and masterclasses focusing on producing and directing, acting, casting, crowd funding and how to harness 3D technology. The numerous opportunities to network will hopefully lead to a whole legion of artists setting sail on fresh, recession-defying collaborations that will spin more tales for our enlightenment for years to come.