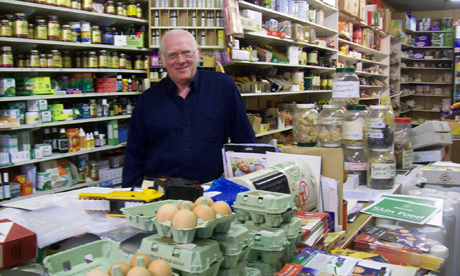 Shopkeepers on Well Street in South Hackney are up in arms as they face eviction following their refusal to agree to steep rent increases imposed by their landlord, a local charity which serves the poor.

Some of the shop-owners are currently in negotiation with the charity, but others have already given up. Three shops in the street have closed in recent months, including a newsagent.

George Edwards, owner of Wholemeal Shop, says the charity wants to increase his annual rent from £6,500 to £18,000. “We might as well lock the door and go,” says Mr Edwards. “Other tenants are leaving, and the people that stay will be penalised.”

Co-chairperson of the Well Street Traders’ and Residents’ Association Ian Rathbone (also a local councillor) says: “It is a shame that a charity which has given money to the poor of Hackney in the past, has become so unforgiving when it comes to the treatment of its own poor tenants, forcing them to pay over the top rents.”

A petition fighting the rent increased has garnered the support of over 5,000 local residents.

The landlord, St John, Hackney, Joint Estates Charities, has not increased the rent on the shops since 1995, and the traders are currently paying amounts that are well below the market value for the premises they occupy. In addition to steep rent increases, the 25 shops – which include a post office – are also in some cases being handed repair bills for £40,000 or more.

The charity manages the properties on a commercial bais in order to fund its charitable activity, and it argues that it is constitutionally bound to make a profit on the properties in order to continue acheive its stated aims, which do not include subsidising shop-keepers.

The charity’s chairperson, a well-known local figure and councillor, Geoff Taylor, says he is committed to maintaining thriving shops on well street, but insists the rents must go up.

He says that the proposed amounts were intended as starting points for negotiations with the shop-owners, not as final offers. “We have put forward a first shot negotiating figure. What we want is for the tenants to come back to us with alternative proposals,” said Mr Taylor.

The plight of the Well Street shops has drawn the attention of the acting Bishop of Stepney and MP for Hackney South and Shoreditch Meg Hillier, both of whom are taking an interest in the matter.

Well Street is in particularly deprived area of Hackney; the street has the distinction of being the launching pad for market stall trader Jack Cohen, who subsequently went on to found the Tesco supermarket chain.

St John, Hackney, Joint estates Charities, which has close links with the Church of England, and in particular with St John at Hackney Church, was founded in 1898 in an effort to consolidate a number of smaller charitable orgnaisations. The charity engages in a variety of activities designed to support groups and individuals in the borough.

Robert Wickham, rector of St John at Hackney church was asked to comment on whether the proposal to increase the rents was compatible with the church’s mission, but he has yet to reply.