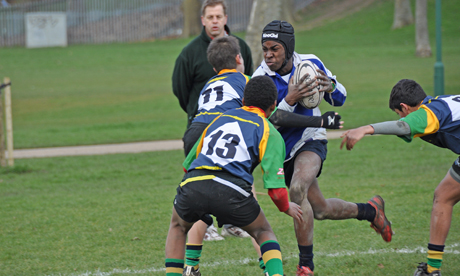 Man of the match Colin Kpodonu takes on the Kilburn backs

In a scrappy game with lots of mistakes Hackney Bulls secured a win against a well drilled and committed Kilburn Cosmos team on Sunday 6 March at their Gladstone Park Ground.

The Bulls started brightly exerting pressure on the Cosmos try line through much of the first quarter of this Middlesex Under-14 League 6 match but a combination of stout defending by the home team and a lack of precision in the final pass by Hackney players, kept them out.

Eventually, the pressure told with Bulls No 8 Colin Kpondonu crashing over for the first try from close range after some good driving work by the forwards. This was the second excellent performance on the trot from the Bulls back-rower and his all round game combining hard running and tenacious tackling earned him a man of the match award from coach Ben Wallbank.

The visiting team kept the pressure up with Bulls prop Noah Grossett going over after more good work by the forwards. Calum Oakley converted to give the visitors a 12-0 lead. Almost immediately Hackney nearly scored again in the corner after a fine run by wing Michael Taylor and the team ended the first half 17-0 up after lock Charlie Killoran took advantage of a spoiled Cosmos line-out to reach the try line.

Although the Bulls started the second half still dominating the game, some magnificent defending by the Cosmos team and lax play by the visitors changed the momentum of the game. Ferocious driving by their forwards at the rucks and some weak tackling by Hackney players resulted in two quick tries and at one stage it looked as though Kilburn were going to pull off an unlikely win.

But after a severe team talk by the coach under their own posts the Bulls rallied with prop Stanley Swift making some bulldozing runs into the opposition’s half to relieve the pressure. Centre Cassius Chrystie sealed the win with a cleverly taken try from an interception which was converted to make the final score 24-12.