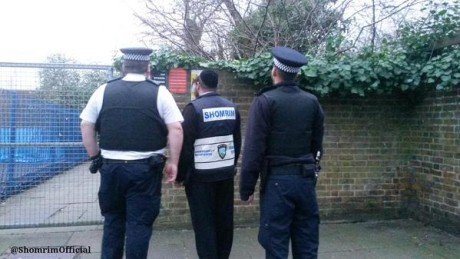 A member of Shomrim and two Hackney policemen look at the graffiti. Photograph: @ShomrimOfficial

Police are investigating after graffitied swastika symbols have been found daubed on a primary school’s sign in Stamford Hill for the second time in a week.

Volunteers from Shomrim, the Jewish neighbourhood watch group, removed the graffiti symbols outside Jubilee Primary School on Filey Avenue on 18 December but the symbols appeared again this afternoon (22 December). 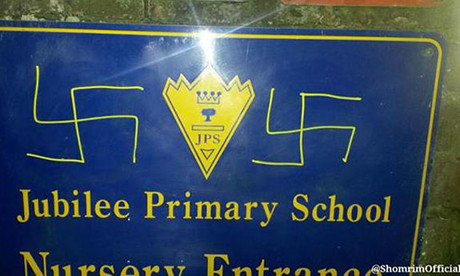 The first instance of the graffiti symbols on the school’s sign. Photograph: @ShomrimOfficial

Shomrim volunteer Michael Scher was on patrol when a member of the public alerted him to the second incident. He said he was “shocked” at the symbols.

Mr Scher said: “This is in an area highly populated by the Jewish community. Many people are Holocaust survivors and family members of Holocaust survivors. The police have covered the graffiti and Hackney Council are coming to remove it.

“Anyone with any information should contact the police on 101.”

Last month over 100 car tyres were slashed in the orthodox Jewish community of Stamford Hill in what the police described as ‘racially or religiously motivated’ criminal damage.